Super Bowl 53: The Fans Guide To A Good Time

Super Bowl 53: The Fans Guide To A Good Time

Where to eat, drink, and be merry on this unofficial American holiday, Super Bowl Sunday.

Making your way to Atlanta for Super Bowl 53 weekend? Get ready to enjoy a weekend of parties, tailgating, and all-around craziness with 150,000 of your closest out-of-town guests. The 2019 version of the big game on Sunday, February 3, will the first in Mercedes Benz Stadium, so Atlanta will be eager to put its best foot forward showing off the city and its shiny new stadium on the world stage.

With tickets reportedly selling for between $3,000-6,000 a piece, finding some wallet-friendly food and entertainment for those breaking the budget just to get int the game. If that describes you, there is some good news. All regular-season Mercedes-Benz Stadium concessions prices will be in effect during Super Bowl 53, including the fan-friendly $2 hot dog and refillable soft drinks. Regardless of the amount of spare change lining your pockets, here’s just a sample of the fun to be had in Atlanta on Super Bowl 53 weekend: 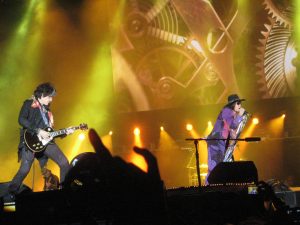 Super Bowl 53 weekend will be a musical one with several big names appearing in concert on the days before the game on February 3. As part of the inaugural Bud Light Super Bowl Music Fest, Aerosmith will perform on Friday, February 1, and Bruno Mars with Cardi B. will perform the next night, Saturday, February 2, at State Farm Arena. The event kicks off, however, on Thursday, January 31 as Atlanta-based hip-hop artists such as Ludacris, Migos, Lil Yachty, Lil Baby, Metro Boomin’ and DJ Lil Jon take the stage.
In addition, the Foo Fighters are scheduled to perform at Atlantic Station on February 2. Want tickets? Too bad. All 3,000 tickets to the show are sold out, however, the band will live stream the concert on the DirectTV Twitter feed, DirecTV Audience Network Ch. 239 or on DirecTV Now.

Watch Parties
While dozens of restaurants and bars will be showing the game big screens all across Atlanta, a handful of local places will host special events with Super Bowl-themed menus during the weekend. The Atlanta Journal-Constitution has an exhaustive list local bar and restaurant happenings, however, check out some highlights below:
• Second Self Beer Company, located on Logan Circle NW, will host a Super Bowl party with food from People’s Barbecue and cigars courtesy of TrilogyATL for $45 per person. Cover charge includes unlimited snacks and food for the day, plus 20 percent off beer and a reserved seat.

• Davios Northern Italian Steakhouse, located in Phipps Plaza, will offer a double-sized portion of their classic bolognese – made with braised veal, beef, pork and tomato sauce – for Super Bowl 53 appropriate price – $53.
• Coalition Food & Beverage, a funky joint located on Canton Street in nearby Alpharetta, will offer $1 chicken wings (buffalo or chili-spiced honey-glazed) and $5 draft beer specials for the game.
• The Buckhead location of the upscale sports-themed restaurant Dantana’s will offer an all-you-can-eat buffet featuring such items as prime rib, snow crab legs, and oysters by reservation for $89.
• Ormsby’s, a neighborhood tavern located on Howell Mill Road, will show the Super Bowl on a large projector screen while offering fans a chance participate in their own games, like backgammon, shuffleboard, darts, pool, and bocce while offering up specials on food and drinks.

Tailgating
Atlanta will host dozens of VIP tailgating events and Super Bowl parties with appearances by renown chefs, celebrities, and sports luminaries throughout the weekend. Here are just a handful of the special events fans can participate in leading up to Super Bowl 53:
• 2019 Players Tailgate One of the premier events at the Super Bowl each year, the 2019 edition of the Players Tailgate will feature more than 30 active NFL players – including Dak Prescott, Kenyan Drake, and Josh Norman to name a few – as well as other celebrities such as Food TV personality and chef Guy Fieri. The party will be held at Pemberton Place near Centennial Olympic Park. Tickets to the event cost $750 per person.

• World’s Largest Tailgate Presented by Unity Tailgate, the World’s Largest Tailgate pre-game event will be held on Saturday, February 2, at the Georgia International Convention Center near Atlanta Hartsfield-Jackson Int’l Airport. A charitable 501c3 organization, Unity Tailgate’s mission is to promote unity and good sportsmanship while promoting charitable giving. Tickets to the event are only $10 (kids 15 and under free) and will give fans a chance to meet former NFL players, more than 30 food and drink vendors, and family-friendly games and activities such as flag football, face painting, cornhole tournament, and an outdoor grilling exhibition. Tickets are only available online.