Sportin’ Down South – Playing It Up in Hotlanta 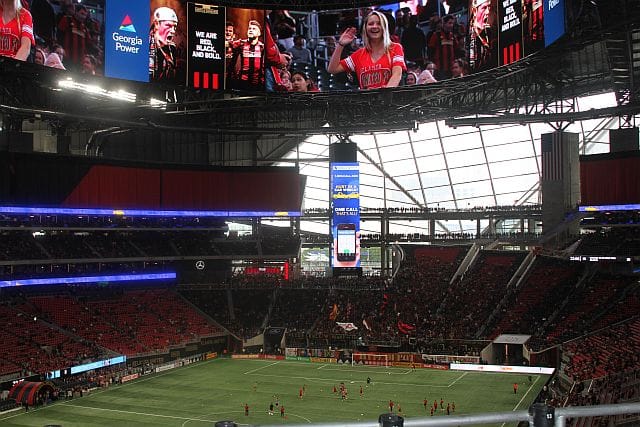 Sportin’ Down South – Playing It Up in Hotlanta

Before we even get started, let’s be honest about something: Atlanta hasn’t always had the best reputation as a winning sports town. While the Braves, Falcons, Hawks, and Yellow Jackets have had some level of success over the last 20 years or so, these teams were, for years, mediocre at best.

Additionally, the city’s pro sports teams from MLB, NFL, and NBA franchises have only called Atlanta home since the late 60s. Combine that with 37 percent of the city’s residents being born outside of Georgia, and the result is a fan base that, historically, has been a little apathetic about its sports teams.

But that is beginning to change. And it’s worth a visit.

For one thing, the women came to town in 2008. Since its inception, the Atlanta Dream WNBA team has qualified for the WNBA Playoffs in eight of its 11 years and grappled to win a berth in the Finals three times.

For another, Atlanta hosts big sporting events, such as college football’s SEC Championships and the Chick-fil-A Peach Bowl. In tennis, the city has hosted the BB&T Atlanta Open for the last 10 years. It’s the inaugural event in the seven-tournament series leading up to the US Open. And this year, the PGA Tour Championship will be held at the historic East Lake Golf Course in August.

As for the city’s pro franchises, their fan bases are galvanizing, thanks to a thing called winning.

The Braves started learning how to win in the 90s, making the postseason for 14 consecutive years from 1991­–2005. And in basketball, the Atlanta Hawks strung together 10 straight playoff seasons although they have failed to make the playoffs the last two seasons.

As for the Falcons, it took them over 40 years to even manage back-to-back winning seasons. However, they did forge on to the playoffs in five of the last nine seasons. In 2016, they caught lightning in a bottle and advanced all the way to the Super Bowl.

However, the final two pieces that polished Atlanta’s reputation as a great sports town came within the last two-plus years—the arrival of Major League Soccer’s Atlanta United FC and the completion of the new Mercedes Benz Stadium. 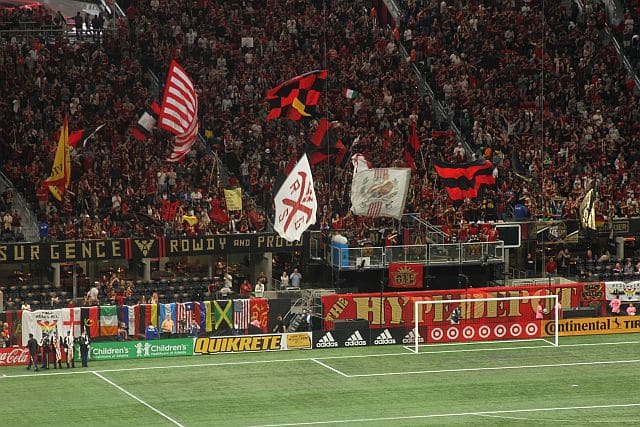 Atlanta United FC kicked off its inaugural season in 2017 and shocked the national soccer world, leading the league in attendance by a country mile. The club has twice had the fourth largest soccer crowd in the world, once in September 2017 and again in March 2018. “We were ready for this,” says Eric Russell, an Atlanta native and United fan. “A lot of people in Atlanta are fans of European leagues and the National team and were just waiting to have a team of our own.

“On the lower level and most of the mid-level nobody sits. One hundred percent of the game, nobody sits at all,” adds Russell. “You stand the whole game, you yell and scream, and chant. It’s loud, and obnoxious, and hilarious, and fun.”

The stadium itself is a modern marvel. Constructed at a cost of $1.6 billion, Mercedes Benz Stadium officially opened in the summer of 2017, just in time for the Chick-Fil-A Kickoff Game between Alabama and Florida State.

The home field for both the Falcons and United, it was designed to provide the proper atmosphere and dimensions for multiple sports. Arthur Blank, the owner of both pro teams made a point of stating that it would not be a football stadium with a soccer team playing on it, or vice-versa.

For football games, the stadium’s capacity stands at 71,000, but becomes more intimate for soccer games, with a normal capacity of 45,000. When converted to the smaller field, mechanized curtains close off the upper-deck seats, while several rows of football field-level seats retract to widen the playing surface for soccer.

The stadium also sports the now famous hexagonal retractable roof, a “halo” video board—the largest in the world—and perfect views of the field from practically any seat in the house.

However, one of the most distinguishing features to the stadium is the reasonably priced food. Mercedes Benz Stadium currently has the lowest food prices of any stadium in professional sports, a feature designed specifically with fans in mind. “We’ll be able to feed a family of four at our games for $27,” stated Steve Cannon, CEO of Arthur Blank’s family of businesses in a 2016 article posted on ESPN.com. “That’s 60 to 70 percent cheaper than our competitors.” 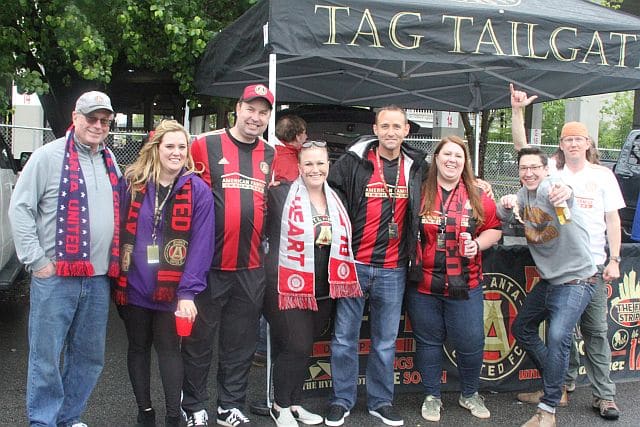 Atlanta is a young city, with approximately 35 percent of the population ages 25 to 44 that energize the city’s vibrant bar scene, especially sports bars. Additionally, with so much of the population transplanted from other areas, it’s easy to find a sports bar catering to teams from your hometown. For instance, Buffalo Bills fans will feel right at home at the Whitehall Tavern on Peachtree Road, while New England Patriots fans meet regularly at Fado Irish Pub in Midtown, also one of the many soccer-friendly bars in the city.

College football fan, you say? No worries. Auburn fans watch the Tigers each Saturday at the Bucket Shop Cafe on Lenox Road, while Alabama fans meet up at Smith’s Olde Bar on Piedmont Avenue.

No sports-theme trip to Atlanta would be complete without stops at the College Football Hall of Fame Fan Experience on Marietta Street NW, or a chili dog and onion rings at The Varsity—an iconic Atlanta fast-food restaurant. Just be prepared to order when you hear the familiar phrase, “What’ll ya have?”