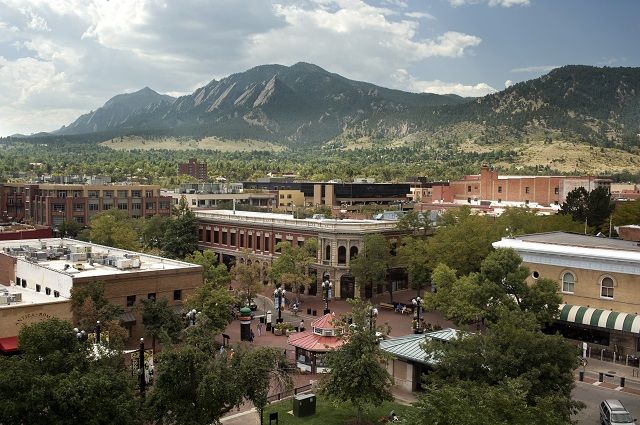 Tucked away in the foothills of the Rockies and set against the jutting beauty of the famous Flatirons, Boulder is a quirky Colorado college town with an easygoing attitude. You won’t even need the legalized marijuana—at 5,000 feet above sea level, you’re already on top of the world.

Tailgating with a View

The University of Colorado has the typical tailgating offerings you’re guaranteed to find on any Pac-12 campus, but what truly sets it apart is the beautiful scenery that surrounds it. The breathtaking backdrop of the Rocky Mountains creates an ambiance you won’t find anywhere else.

“Every school has something beautiful and unique about it, but there is just something quite magical about the campus in Boulder. And by the time you add in the natural elements, as well as what the university has been upgrading and doing, it’s a pretty unique experience,” says Traci McCreary, whose friends call her the Chief Tailgate Organizer. She and her husband Joe, a former CU football player, are part of Buffs4Life, an organization that raises funds to help former players and coaches in times of need. It’s an example of just how close-knit this football community is.

There’s no better place to experience that CU community than the Pearl Street Stampede. This Friday night pep rally in downtown Boulder kicks off home-game weekends with an antique CU-emblazoned fire truck, followed by the Golden Buffalo Marching Band, cheerleaders and the football players themselves.

Franklin Field—a zero-waste, car-free tailgate zone that also serves as the Buffs’ outdoor practice field—is a fan favorite, where spots sell quickly to season ticket holders and donors. However, there are plenty of other options across campus, including the Alumni Association’s official tailgate on Duane Field. Free and open to everyone, alumni or not, Ralphie’s Corral is where you’ll find the team’s live mascot, a 1,200-pound buffalo, before each game. Snap a selfie with her, let the kids go crazy in the bounce houses, and take in a performance by the school’s Spirit Squad. It’ll be time to head to the game before you know it.

Get to your seat at Folsom Field before kickoff to see the storied tradition of Ralphie majestically charge down the field. A celebrity among CU fans and opposing teams alike, the buffalo has been named college football’s No. 1 live mascot for good reason.

Ralphie’s origin story goes back to 1934, when the now-defunct Silver & Gold student newspaper hosted a contest to come up with a new team name. The Colorado Buffaloes won, but it wasn’t until 1967 that the university owned its very own adult bison. It takes five handlers to run with Ralphie—two guides up front, two in the middle, and one in the back to control her speed, which can reach 25 miles per hour. She’s the embodiment of CU football—fearless and headstrong. 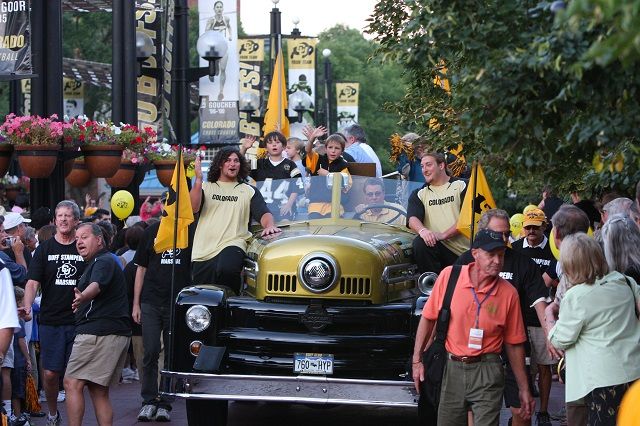 Boulderites don’t take for granted the glorious geographical features that surround them, and no visit would be complete without exploring for yourself. The city is an island enveloped in 45,000 acres of open preserved land, featuring 151 scenic public trails and more than 60 urban parks.

As one of the most outdoorsy cities in America, Boulder is a top destination for adventure sports, including mountain biking, cycling, rock climbing, and kayaking. It’s a hiking heaven, and with an average of more than 300 sunny days each year, there’s plenty of time to get out there.

Don’t miss historic Chautauqua Park (chautauqua.com), a picturesque recreational space that serves as the gateway to the awe-inspiring natural wonders known as the Flatirons, a series of five slanted, sandstone formations rising 1,400-feet in Boulder’s backyard. If that’s not enough, look for immense 700-pound elk standing 5-feet high at the shoulder in Rocky Mountain National Park, America’s third most visited national park, only an hour’s drive away.

Snow sports more your speed? You’ll love that Boulder is within two hours of eight world-class ski resorts. Nearby Eldora Mountain Resort (eldora.com) boasts 600 acres of terrain, four restaurants, and shorter lift lines than most Colorado resorts. It’s a great place to learn to ski for beginners, but will entertain more advanced skiers, as well. Eldora is also a popular spot for Nordic skiing and snowshoeing.

Runners, there’s something here for you, too. The Memorial Day Bolder Boulder 10K (bb10k.bolderboulder.com) attracts over 50,000 participants each year, making it the third largest race in the country. Now in its 40th year and named America’s All-Time Best 10K by Runner’s World magazine, the BB10K sees elite athletes and first-time joggers alike cross the finish line in front of a roaring crowd of 70,000 fans at CU’s Folsom Field. Here’s your chance to run in your very own summer games. 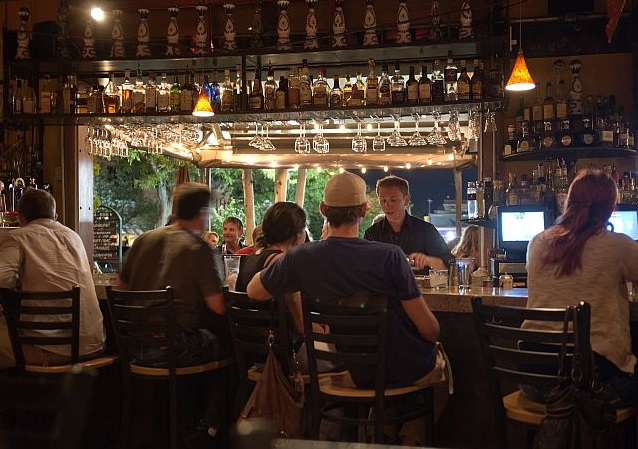 You’d be wrong to assume Denver is the only city in Colorado with breweries galore. Just a 30-minute drive from the Mile High City, Boulder had the second highest number of microbreweries per capita in the country in 2016. It’s part of what many refer to as the Napa Valley of Beer. In fact, the American Homebrewers Association and the Brewers Association, which represent the nation’s small and independent craft brewers, are located in Boulder.

Tickets to the annual Boulder Craft Beer Festival (bouldercraftbeerfest.com) in August have sold out every year since it began, so you know it’s good. Hop on the Boulder Beer Trail from one end of the city to the other.  This journey offers 34 locations to consume adult beverages, including 24 beer breweries, like the Boulder Beer Company (boulderbeer.com). As the state’s first craft brewery, it was founded by two University of Colorado professors in 1979 and is still going strong today. Grab a bite to eat from the onsite pub’s extensive menu and wash it down with a pint of Buffalo Gold, a Colorado classic golden ale that gets its name from the state’s iconic grazers.

Bar flies will have plenty to occupy their time, but there’s more than one type of brew to be had in Boulder. Stop by Celestial Seasonings (celestialseasonings.com), famous the world over for its flagship unique herbal-tea blends, like Sleepytime and Red Zinger. Go behind the scenes with a 30-minute guided tour of the factory where 4.4 million tea bags are produced each day. Named one of the country’s best food factory tours by USA Today’s Readers’ Choice 2015, this free tour includes visits to the Art Gallery, the Tea Sampling Bar, and the famous Mint Room, an invigorating and sinus-clearing experience.

For a more global tea-time affair, visit the Boulder Dushanbe Teahouse, a gift to Boulder from its sister city, Dushanbe, Tajikistan. The vibrant building was intricately handcrafted by more than 40 Tajik artisans and shipped piece-by-piece to be assembled in Boulder without power tools. 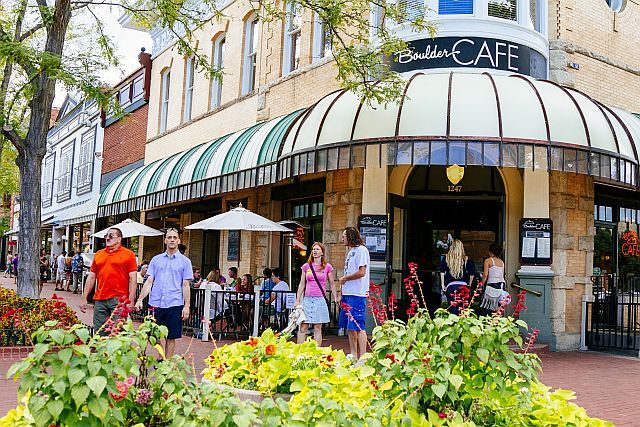 The Pearl Street Mall, a bustling, pedestrian-only thoroughfare, is this city’s heartbeat. Located in the center of historic downtown, Pearl Street is a hub for shopping, dining and people-watching. It attracts millions of visitors each year.

Fans of live music will enjoy the free Bands on the Bricks performances in the summer, and Boulder Theatre offers shows year round. Don’t pass by Pearl Street’s iconic street performers, featuring everything from contortionists and fire jugglers to drum circles and singers. Look out for local celebrity David Rossteicher, better known as “Zip Code Man,” who correctly guesses where his audience members live based solely on their zip code.

Make room in your suitcase for a few souvenirs, because Pearl Street is a shopping mecca. Big name brands like Patagonia, Urban Outfitters, and The North Face have shops on Pearl, but it’s also a hot spot for things uniquely Boulder. Check out the always popular Peppercorn (peppercorn.com) for gifts for your favorite foodie, or Into the Wind (intothewind.com) for kite lovers and fighters, both young and young at heart.

After a morning hike and an afternoon of treasure hunting, you’ll likely be looking for something to satisfy your appetite. One of Food & Wine’s “10 Best Foodie Streets” in the United States in 2015, Pearl Street has that covered too. Make reservations at the two-time winner of James Beard Awards, Frasca Food and Wine (frascafoodandwine.com) to nosh on award-winning Northern Italian eats.

This green city has championed organic produce since the 1960s, so, with its ecocentric sensibilities, it’s no surprise that Boulder embraced the farm-to-table movement early on. Enter the Kitchen (thekitchenbistros.com), a community bistro chain cofounded by Kimbal Musk that has been called the West’s greenest kitchen. If you’re looking for something a bit less pricey and a little less healthy, grab a table on the rooftop patio at The West End Tavern (thewestendtavern.com) and chow down on delicious burgers and barbecue. Which makes an ideal end to your Boulder getaway, by taking a seat at their heirloom bar and tipping a frosty mug of cold craft beer or slowly sipping that final good-bye glass of amber liquid from their array of finest bourbons. 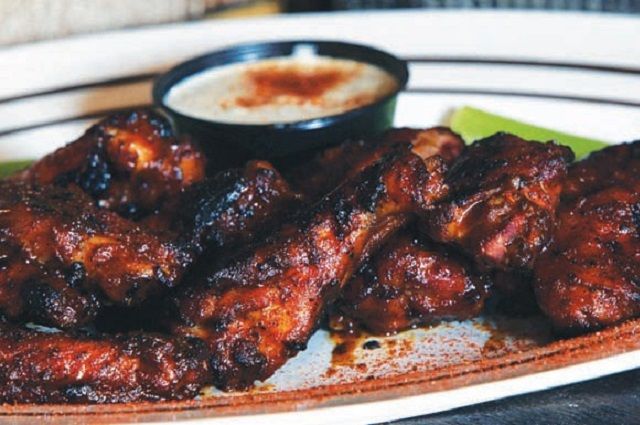 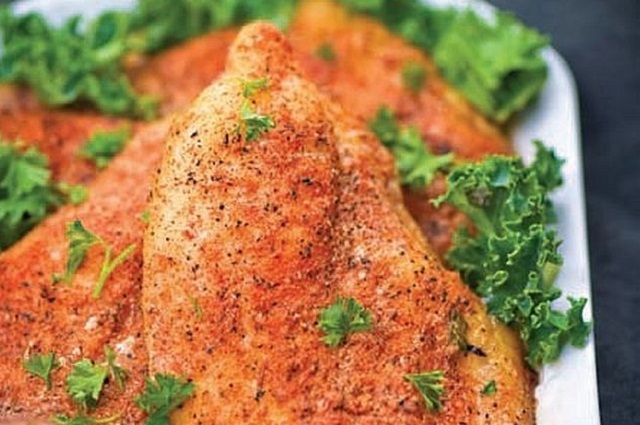 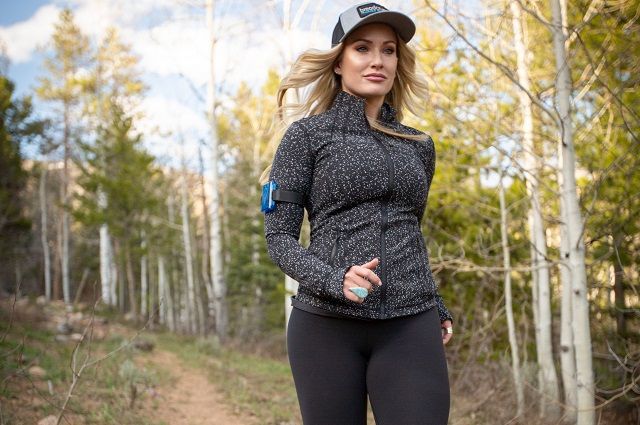