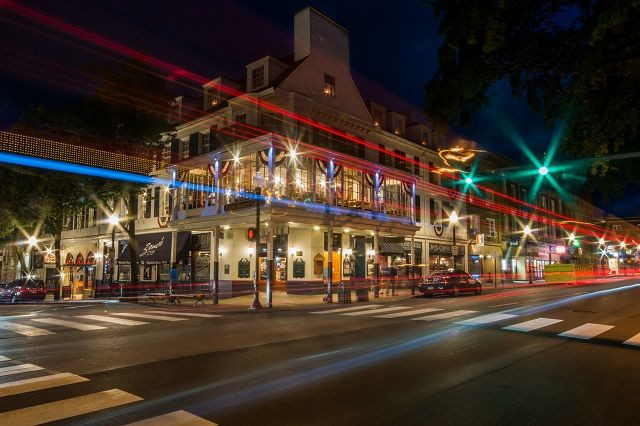 State College harbors a population of 42,000 people. But when the Penn State Nittany Lions take the field in the fall, Beaver Stadium becomes the fourth largest city in the commonwealth of Pennsylvania. It’s true that football is paramount in State College, but that’s not all this town has to brag about. Here you’ll discover picturesque natural beauty, a fisherman’s paradise, relaxed farm-to-table restaurants, and world-famous ice cream. It’s no wonder they call it Happy Valley. 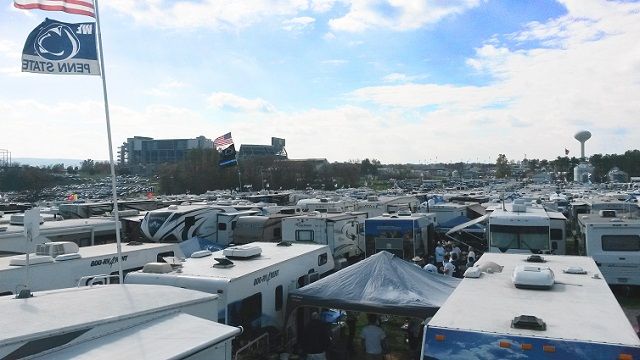 From the storied history built by Joe Paterno to an exciting new era with James Franklin at the helm, Penn State is an iconic brand among college football’s elite. Game days bring as many as 115,000 diehard fans to State College, almost tripling the town’s population.

When you consider its distance from the state’s largest cities—three hours from Philadelphia and more than two hours from Pittsburgh—you begin to understand how important this team is to Pennsylvania.

It’s no surprise that tailgating is a pretty big deal too. As the second largest stadium in the western hemisphere with a capacity of 106,572, historic Beaver Stadium is surrounded by a 500-acre open-field area. What was once a cow pasture is now a sea of blue and white before every game.

Penn State fans can thank a traffic jam for their tailgating tradition. In “100 Things Penn State Fans Should Know and Do Before They Die,” author and alumni Lou Prato explains it like this:

Following a particularly messy gameday traffic pileup in 1960, not long after the team moved to its new Beaver Stadium, the Centre Daily Times recounted the incident as a total nightmare, leaving “police swearing, drivers cursing, and pedestrians jumping for their lives.” In an accompanying editorial, editor Jerry Weinstein suggested fans bring picnic lunches and dinners to avoid traffic. It caught on and now it’s big time.

Steve Sampsell has been tailgating with friends and family in the same spot for the last 16 years. From the Penn State Glee Club to the Penn State Blue Band, you never know who might show up at the Labor of Love Tailgate, a name Sampsell coined during a particularly difficult season. Over 450 people have signed their names to the tailgate’s register book, one of Sampsell’s favorite traditions, emphasizing the strong sense of family, no matter who’s there.

After the devastating tornado that struck Tuscaloosa, Alabama, in 2011—home to the Crimson Tide—the Penn State group hosted a relief fundraiser and served Yellow Hammers in honor of their fellow college football blue bloods.

“We’ve cheered our team’s successes and complained about struggles,” Sampsell says. “We’ve hugged and laughed. We’ve also cried about health issues for family members, celebrated graduations, engagements, births and so much more. Two years ago, my wife and I renewed our vows during a tailgate, which was pretty cool. And I could not think of a better place to do it.” 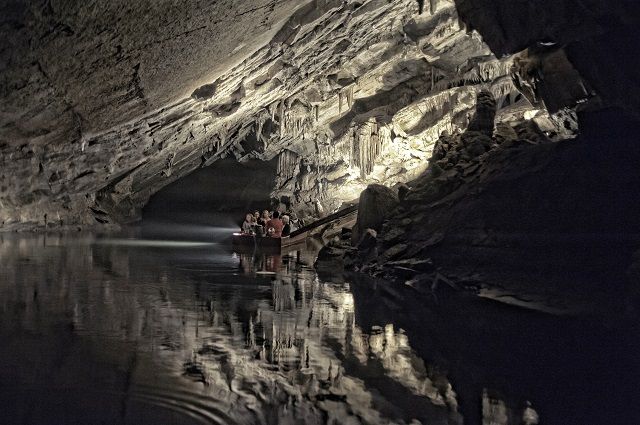 Happy Valley is a nature lover’s playground. Avid anglers will appreciate the world-class waterways, featuring over 216 miles of trout fishing waters. Located some 15 miles from State College, Penn’s Creek is the longest limestone trout stream in the state of Pennsylvania. Sections are stocked with rainbow trout, but wild brown trout swim this stream, as well. Fly fisherman from around the world descend on Penn’s in late May and early June for the highly anticipated hatch of the Green Drake mayfly.

If fishing isn’t your forte, but aquatic adventure entices, plan a visit to Penn’s Cave & Wildlife Park (pennscave.com). Hop on a flat-bottom motorboat for a 45-minute guided tour of America’s only all-water cavern, featuring otherworldly rock formations, glittering stalagmites and stalactites, and passageways created millions of years ago. After your tour, enjoy the park’s other offerings, including a 1,600-acre wildlife preserve, off-road mountain Jeep tours, and a 4,800-square-foot labyrinth.

The winter months in central Pennsylvania can be harsh, but bring with them perfect conditions for snow sports enthusiasts. State College is within two hours of local ski resorts and only three hours away from the Poconos.

For something a little closer, take a 10-minute drive to nearby Tussey Mountain (tusseymountain.com) in Boalsburg, which offers a number of activities for winter sports lovers. After a day spent skiing, snowboarding or snow tubing, refuel with a burger and live music at the Edges Pub at Tussey Mountain Lodge. When the snow melts, the park opens its summer Fun Centre, complete with batting cages, go-karts and mountain mini golf.

Need to stretch your legs? Head for the hills and take a hike on one of the many nearby trails. It’s a rite of passage for Penn Staters to trek Mount Nittany. A fairly easy climb to the top will reward you with beautiful vistas and the best view of the university below.

Pine Creek Gorge, known as the Grand Canyon of Pennsylvania, is about an hour drive from campus. The National Park Service designated a 12-mile stretch as a National Natural Landmark for its “superlative scenery.” Give the nine-mile Golden Eagle Trail overlooking the gorge a shot, if you’re up for a challenge.

Maybe you’d rather appreciate nature from a distance. Get a bird’s-eye view of it all while floating through the clouds on a hot air balloon (paballoonrides.com), and take in the glistening fall foliage or snow-covered hills from the sky. 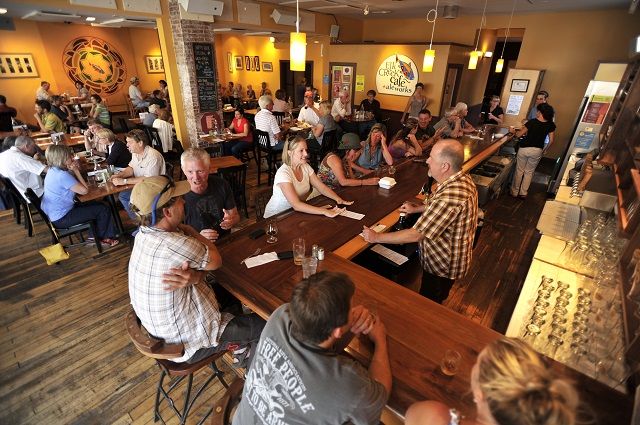 You’ll work up an appetite after exploring Centre County and, despite the town’s size, you’ve got a number of tasty options in State College. For breakfast, look no further than the Original Waffle Shop (originalwaffleshop.net). On football weekends, arrive early or wait in line. If you’re short on time, stop by Bagel Crust (bagelcrust.com) on Calder Way or Beaver Avenue. The Hangover bagel might be exactly what you need the day after a big game.

When lunchtime rolls around, grab a burger at either The Field Burger & Tap or Baby’s Burgers & Shakes (babysburgers.com). Voted Best Burger and Fries in State College by State College Magazine last year, The Field is known for its elevated yet casual menu with a focus on locally sourced, farm-to-table ingredients. Located at the Toftrees Golf Resort (toftrees.com) you can burn off a few calories on the green.

At Baby’s, you’ll find classic diner fare served in a vintage 50s setting, complete with poodle skirt-clad waitresses. Try a $2 Whimpy Burger or something more adventurous, like the mac-and-cheese covered Mac Attack or the Craz-E-Burger, a bacon cheeseburger served on a grilled glazed donut.

Dining at the Nittany Lion Inn is Penn State tradition (nittanylioninn.psu.edu). Since opening in 1931, the premier university hotel has hosted a number of famous guests over the years, from Eleanor Roosevelt to Danny DeVito. The Colonial-style inn is home to two award-winning restaurants: Whiskers, offering a traditional pub-style experience, and The Dining Room, synonymous with fine dining in State College.

“My parents had their wedding reception at the Inn in the 70s,” says PSU alumni Erin Everett. “My mother wore a powder blue dress and my father a blue tuxedo. It was, and continues to be, the place where Penn Staters gather to celebrate their life events and their love of Penn State. That and the lobster bisque and Sunday brunch! It’s quintessential State College and Penn State in one place.”

You can’t visit Happy Valley without enjoying a cone from local dairy darling Berkey Creamery (creamery.psu.edu). What began as a laboratory for Penn State agriculture students over 150 years ago is still scooping nearly 750,000 cones and bowls a year of famously rich ice cream.

But Berkey hasn’t forgotten its roots. The creamery continues to be a world leader in dairy production and food science, attracting some of the biggest names in ice cream to its legendary short course each year. In 1978, Ben Cohen and Jerry Greenfield took a $5 Penn State correspondence course on ice-cream making before launching their own company later that year. Yeah, we’re talking about that Ben and Jerry.

The shop rotates 20 of its over 120 delicious flavors at a time, including classics like Death by Chocolate, Monkey Business, and Peachy Paterno, its namesake’s favorite treat.

If that’s not enough to sate your sweet tooth, ask for a world-famous grilled sticky. It’s a mouthwatering cross between a cinnamon roll and a sticky bun sliced into rectangles and fried on a griddle. This Penn State staple was originally served at Ye Olde College Diner, a fixture on College Avenue since opening in 1929 until it closed last year. Nostalgic Penn Staters are in luck, though—the Diner opened its own grilled sticky manufacturing facility in nearby Boalsburg, supplying local restaurants and customers worldwide with the iconic sugary goodness every day.

To wet your whistle, there are plenty of dive bars and collegiate watering holes to choose from, but the best way to explore the craft beverage scene in Centre County is on the Central PA Tasting Trail (visitpennstate.org/eat/central-pa-tasting-trail). There’s something for everyone on this self-guided tour of 12 award-winning breweries, distilleries, wineries, and cideries. Beer aficionados should flock to Otto’s Pub & Brewery (ottospubandbrewery.com), the first local microbrewery in State College.

Or to end your stay in a more mellow pastime, pay a visit to Mount Nittany Vineyard and Winery (mtnittanywinery.com) six miles outside State College. Enjoy their free wine tasting or bring a picnic and idly sit at their outdoor tables, taking in the breathtaking views across Penns Valley to the Tussey Mountain Range while enjoying a bottle of their signature Tailgate Red.