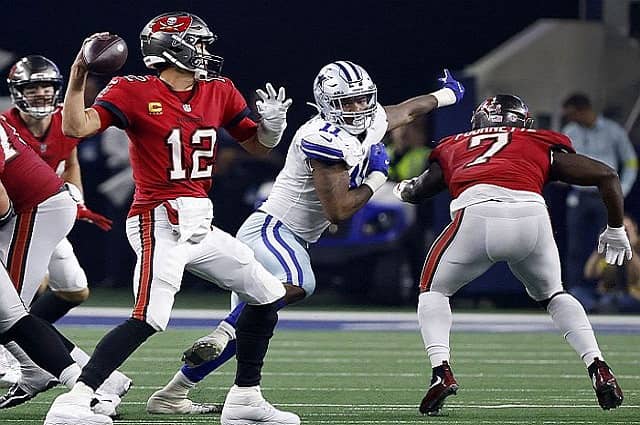 With only one NFC playoff spot available heading into Week 18 play, the Seattle Seahawks did what they had to do, which was win. Of course, they also had to hope that the Detroit Lions beat the Green Bay Packers.  Which they did.  However, there was little drama for the rest of the conference.  The Philadelphia Eagles shored up the number one seed and a bye-week, while the rest of the conference playoff teams seemingly just went through the motions with three of the playoff bound teams taking a loss. That changes now as the NFC wild card games have plenty of interesting matchups this weekend. Here’s our NFL Wild Card Games NFC preview.

He’s Purdy good, isn’t he? The rookie QB for the Niners is really complicating future plans in San Francisco as he has now won five straight games and has taken this team to a number two seed in the NFC. With an overall 10-game winning streak, the Niners have made easy work of each of their opponents in recent weeks and I don’t see that changing against Seattle who had to scratch and claw to get past the Los Angeles Rams in their season finale. Seattle’s offense has been off over the course of the last four weeks where they have averaged less than 17 points each contest. San Fran on the other hand has been a wrecking machine on that side of the ball, averaging 33.5 points per game since Purdy took over under center. In two games this season, the Niners have made easy work of Seattle and I would bet for that to happen again here in the opening weekend of the postseason. Prediction: 49ers 28 Seahawks 17

The biggest obstacle for Kirk Cousins and the Vikings in this game might be the fact that it isn’t being played at 12 p.m. He has been a noticeably worse quarterback in prime time and late afternoon games with three of their four losses coming in those time slots against just two wins. The Giants turned it around and made the playoffs for the first time in six years under first-year head coach Brian Daboll. While their offense lacks a top-tier signal caller, they still can explode with help from Saquon Barkley. Their defense has been exceptional this season and poses the kind of threat that should make Kirk Cousins very nervous. There are often unexpected upsets in the first round of the playoffs, and this is my expectation in this game. These two teams played three weeks ago, and the Vikings pulled off a come-from-behind win in the fourth quarter. NY rested their starters on Saturday and still nearly beat Philly. I like this team’s attitude and toughness. Prediction: Giants 24 Vikings 21

The Cowboys couldn’t pull off a win against the Washington Commanders as they were fighting for the potential number one seed with all their starters playing. It was a bit of a concerning game for a team that had plenty to fight for and no real bark at all. Dak Prescott has been a turnover machine this season, now throwing a pick in seven straight games. Luckily for them, they are facing a Bucs team that has just looked “off” all season. While they mostly rested their starters on Sunday, the Bucs still lost to the Atlanta Falcons which never bodes well as you hope to ride a little bit of momentum into the postseason. In Week 1, Tampa shut down this Dallas offense. I’m not sure we will see that level of domination again. The true test will be Tampa scoring some points which has seemed nearly impossible for them all year. Tampa will need vintage Tom Brady in this game. With the prospects of this being his final NFL game, or at least his final in Tampa, I think we will get that performance in a close game. Prediction: Cowboys 20 Buccaneers 23