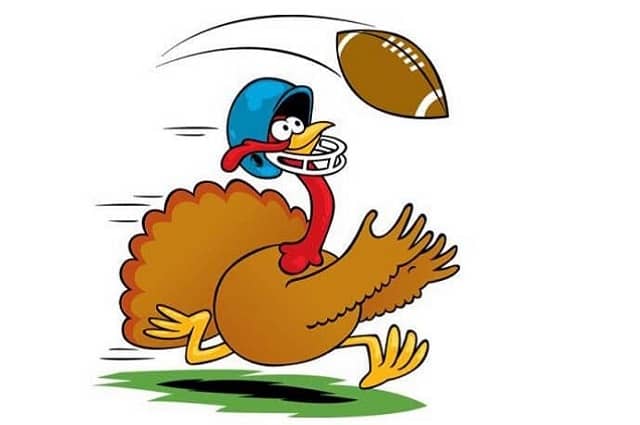 Thanksgiving is one of my favorite holidays. The Macy’s Day Parade, the turkey on the table, the beginning of the Detroit Lions game, wearing my loosest pair of pants, and making sure that one aunt doesn’t drink a tad bit too much…what isn’t to love. Thanksgiving football has become such an important part of the holiday and while the three games slotted may not always be the most exciting ones you’ll see all season, it’s a tradition that I have grown to love. I thought it’d be a good time to say my thanks to the pigskin being tossed around on Turkey Day and share with you some fun facts and funniest moments.

I think this runs through everyone’s head each and every year. There are two teams that play every Thanksgiving, no matter what. The Dallas Cowboys and the Detroit Lions always host a Turkey Day game. The tradition began in 1934 for the Lions. George A. Richards owned the team then as well as the local NBC station. He connected the two and made it work. Other teams had played on Thanksgiving before, but Richards brought the network along and made it quite profitable. The only time they have missed games on Turkey Day was due to World War II.

The Cowboys didn’t jump into the action until the 60’s when their GM wanted to make some more money as well. So…we are stuck with the Lions…it’s too bad the Steelers or Packers didn’t jump at the bit.

Jerome Bettis Coin Toss – The Pittsburgh Steelers took on the Lions in the 1998 game that went to overtime. Steelers captain Bettis said he had called “tails”, but the official insisted that Bettis had called “heads-tails” and according to NFL rules, a team’s first call is the one the referee will use. The Lions scored a field goal on their first possession of the overtime to win the game. The Steelers were outraged, and the league had to change the coin toss rules because of this.

The Butt Fumble – Maybe my all-time favorite Thanksgiving moment. On the nightly NBC broadcast against the New England Patriots in 2012, NY Jets QB Mark Sanchez ran into his own lineman causing him to fumble the ball and the defense returned it for a touchdown. The butt fumble is often considered one of the most inept plays in NFL history and is also ranked as the most embarrassing moment in Jets history by ESPN.

Randy Moss Game – In 1998, Minnesota Vikings receiver Randy Moss went OFF against the Dallas Cowboys, the team that passed on him in the NFL draft that season after indicating before the draft that they would select him. Moss had just three catches in the Thanksgiving game, but they went for 51, 56, and 56 yards…oh, and all three receptions resulted in touchdowns. The failure to draft Moss haunted the Cowboys for years.

Ever thought, “why hasn’t my team played on Thanksgiving”? Well…you must be a Jacksonville Jaguars fan. The Jags are one of the “newest” franchises in the league and the only team to never suit up on Turkey Day. Honestly…probably for the best if they were matched up against Detroit.

The TV networks have had a very fun time branding these games and the game MVP “trophies” are among the best part. John Madden gave out the initial “Turkey Leg” award in 1989 to Reggie White of the Philadelphia Eagles. Other networks have developed their own version in the following years.

Working on Thanksgiving is tough and many of the people that make these games happen are away from their families. Each network does a wonderful job of thanking the crew of each broadcast with family photos and short stories about each member of the team.