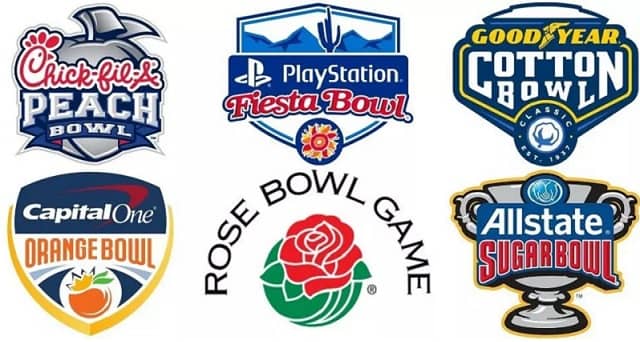 The College Football season is coming to an end, but not before the final two New Year’s Six Bowl games go down. Texas A&M made a strong case to be included in the College Football Playoff over Notre Dame and Ohio State. A dominating Orange Bowl victory may prove that they deserved to be one of the four teams playing for the national championship, especially if Notre Dame gets obliterated as expected against Alabama in the CFP semifinals.

However, a couple of teams playing in the NY6 bowl games didn’t have the greatest seasons yet still were awarded the bowl games thanks to their conference bowl alliances. For instance, the Pac-12 is guaranteed to play in the Rose Bowl, or some other NY6 bowl game, regardless of whether they truly deserve to play in the game. Here are the two New Year’s Six games that will be played on January 2.

It seems a little outrageous that the 25th ranked team in the country will be playing in a NY6 Bowl but we can thank the aforementioned conference bowl tie-ins for that. Oregon played just six games and finished the year 4-2. They weren’t supposed to play in the Pac-12 Championship game, but Washington was unable to play due to COVID, which opened the door for Oregon to play where they ultimately upset USC. The Ducks should consider themselves lucky for getting the call for that game and now will make tons of money for their program for reaching the Fiesta Bowl.

Iowa State on the other hand had one of their best seasons in recent memory. However, they still lost three games, including to Oklahoma in the Big 12 Championship Game. The Cyclones had a quality win earlier in the season against the Sooners and they also beat a ranked Texas team. The Cyclones can score points at a high clip as they average nearly 33 a game while their defense was one of the best in the Big 12, allowing just under 22 points a game. If the Cyclones can slow down Oregon quarterback Tyler Shough, the offense should score enough to win.

If one team should feel disrespected for not being included in the College Football Playoff, it is the Texas A&M Aggies. They are the first one-loss SEC team ever to not make the CFP since it’s inception for the 2014 season. There were many arguments that this team should have gotten in over Ohio State who played just six games, or over Notre Dame after they were destroyed in the ACC championship game, but the selection committee wasn’t going to hear it. The Aggies went 8-1 with their lone loss coming to Alabama while picking up an impressive win over Florida. The Aggies are led mostly by their excellent defense that allows just 21 points a game and held opponents to 20 points or fewer six times this year.

The Tar Heels are a product of another conference bowl tie-in as UNC went just 8-3 with a couple of embarrassing losses to Florida State and Virginia. They ended their season on a high note with a win over Miami, 62-26. The Tar Heels have the sixth ranked offense in the NCAA and should be a worthy opponent for Texas A&M despite the difference in rankings. However, the Tar Heels leading rusher and receiver have opted out of the game. This is the first ever meeting between the two teams and the Aggies are favored by 7.5 points.