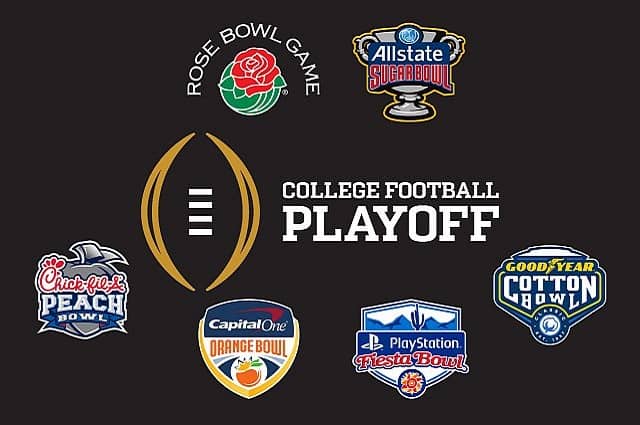 We have long awaited a new college football season and it is finally here. After an offseason that seemed to have nothing but drama, we are finally settling in for a season of action, where all the nonsense and hot takes can be played out on the gridiron. Before the season gets officially underway, I want to make sure to get my picks in so that no one can call me out for missing any action. In this article, we will break down who we expect to see play in the New Year’s Six Bowl Games and College Football Playoffs.

Notre Dame has a very tough schedule towards the end of the year, and they play a bunch of good programs in Wisconsin, Cincinnati, USC, and North Carolina. They should be ok, but I think the committee has learned their lesson and won’t be placing them in the CFP. For Texas A&M, they just don’t face a ton of difficulty outside of Alabama and LSU and their resume may not be good enough for anything else. Winner: Texas A&M

UNC will make a run for the College Football Playoff and come up just short. I think Cincy will be the highest ranked Group of 5 to come out of this season, battling the whole way with Coastal Carolina, but ultimately Bearcat quarterback Desmond Ridder is just too good. Winner: North Carolina

Come on? Who wouldn’t love to watch this matchup? Indiana is coming off their best season in decades and they have the tools to finish second in the Big 12 behind all-mighty Ohio State. ASU has its most experienced and talented team in the Herm Edwards era and the world could learn quarterback Jayden Daniel’s name. Winner: Arizona State

The Cyclones, like UNC, will be an underdog school making the ultimate push for a spot in the CFP but a loss early in the year will trip them up. For Georgia, it will just be too much to go undefeated with a schedule full of Clemson, Auburn, and Florida. Winner: Iowa State

The Buckeyes have the easiest schedule out of any legit CFP team, and they will get in as the four seed while the Crimson Tide will cruise past their SEC foes to another undefeated season. Two young quarterbacks and two of very best coaches in college football should make for a fun rematch of last year’s National Championship.  Winner: Alabama

We have all anxiously awaited this Oklahoma team that disappointed us in 2020. They have a schedule that isn’t too tough but there will be a target on their backs as they are soon bolting for the SEC. Clemson is in good hands with DJ Uiagaleliei taking over for Trevor Lawrence under center.  Winner: Oklahoma