Designed with Tailgating in Mind!

Better bring your swimsuit if you go to a Washington Redskins game when the new stadium opens. The stadium concept, designed by world-renowned architectural firm Bjarke Ingels Group (BIG), features a large moat that circles a 60,000-seat, open-air stadium. 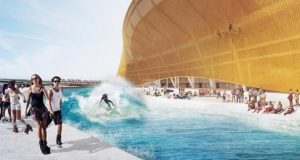 BIG has never designed a sports stadium, which might be why the Danish firm has come up with a pretty unique model that is designed to be used year-round and for more than just games. The renderings depict a semitransparent, wavelike structure that could function as a possible amphitheater for up to 100,000 people, as well as a Redskins museum, the team’s headquarters and training facilities, and a recreational park. 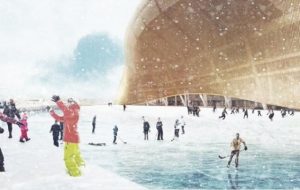 “The stadium is designed as much for the tailgating, as for the game itself,” Bjarke Ingels said in an interview with 60 Minutes on CBS. “Tailgating literally becomes a picnic in a park.” The location of the stadium, as well as a potential opening date, has yet to be decided. The firm, which also designed Google’s headquarters, is considering sites in the tri-state Washington, D.C. area.