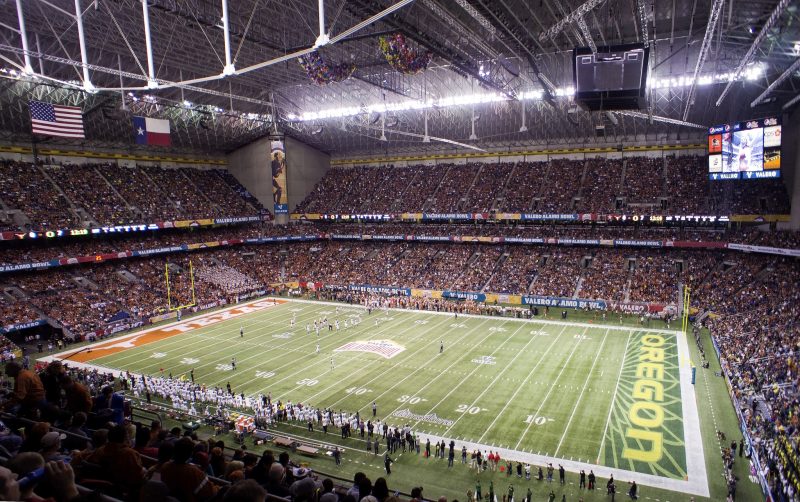 Is San Antonio On The Brink Of Reeling In The Big NFL Fish?

San Antonio mayor Ron Niremberg made news last week when he predicted his city will be home to an NFL franchise within the next decade. In an item reported by Ryan Wilson on CBSSports.com, Niremberg says he believes San Antonio is on the cusp of becoming the next great major-league sports town.

“I really believe the momentum that San Antonio has experienced over the last few years,” Mayor Ron Nirenberg told KSAT-TV in a recent interview, via the San Antonio Current. “Most recently with the announcement of major jobs coming to Brooks City-Base as well as the downtown UTSA (University of Texas satellite campus in San Antonio) campus and the rise of Texas A&M, the community college districts as well, you will see an NFL team in San Antonio in the next 10 years.”

Currently the seventh largest city in American with a population of just under 1.5 million, it is striking that San Antonio has only one major league team, the NBA’s San Antonio Spurs. Despite the success of the Spurs over the years, football remains the holy grail deep in the hear of Texas. San Antonio was once home to the Gunslingers of the USFL in the 1980s and the Renegades of the forgettable World League of American Football in the early 1990s. However, the city did host the New Orleans Saints for three games in 2005 after the team was displaced due to Hurrican Katrina – and there was some speculation about the team moving to San Antonio permanently – and attracted a solid number of fans over those games, averaging more than 62,000 fans in the Alamodome.

There have been other attempts in recent years to bring the NFL to San Antone, to no avail. For instance, Red McCombs, the former owner of the Spurs, attempted to lure the Oakland Raiders to San Antonio before the team made the decision to relocate to Las Vegas. In 2015 Ivy Taylor, then mayor San Antonio, offered to host the Raiders temporarily until their club’s new Vegas stadium was ready, in yet another attempt to bolster the city’s pro football bona fides.

For now, professional football fans in San Antonio will have to satisfy to cravings when the newest spring league, Alliance of American Football, launches. The San Antonio Commanders, one of eight charter members of the AAF, will begin play in February 2019.

Up Next: Five Cites On The Cusp Of The Major Leagues