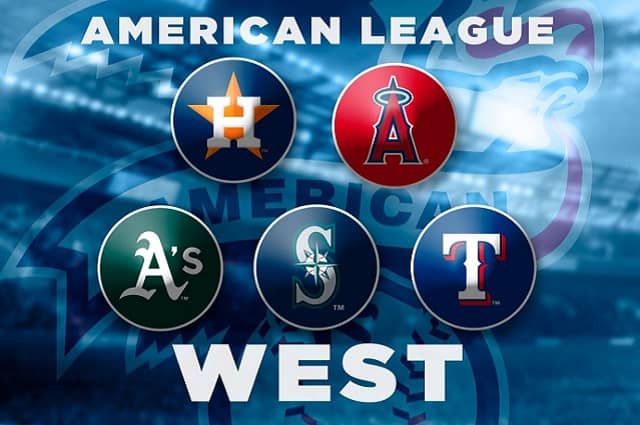 Hallelujah, baseball is back. After a grueling MLB lockout, it is nice that players have reported for Spring Training and that the season is nearly here. It was a great 2021 season where the Braves knocked off the almighty Dodgers and Astros on their way to a World Series victory. We saw the emergence of new superstars, different teams rise to the top, and former powerhouses sink to the bottom. With the season fast approaching, let’s catch you up on everything you may have missed and what you need to know with our MLB predictions. Here is a preview of the AL West.

Once again…seemingly like every year recently, the Houston Astros were the best in the West. The ‘Stros won 95 games in 2021, finishing ahead of the 90-win Seattle Mariners. Seattle unexpectedly rose to the top with a young core while the Oakland Athletics put together a solid 86-win season.  The Los Angeles underperformed well below the mean, especially after losing superstar OF Mike Trout in mid-May. The Rangers, who are in a rebuild, finished in last place 35 games back of first. Houston flirted with a World Series title but couldn’t overcome the Atlanta Braves who were a team of destiny. The ‘Stros looked down and out during the AL Pennant against the Boston Red Sox but relied on strong starting pitching to get them to the Fall Classic.

Astros – SS Jeremy Pena – I am throwing an unknown name on this list as Pena has the incredibly daunting task of replacing SS Carlos Correa.

Rangers – SS Corey Seager – You read that correctly. The Rangers went all-in during free agency and signed the likes of Seager and other big-name stars

Athletics – P Frankie Montas – The ace has been left on a team devoid of big-names after a fire sale, he might be the next one to go

The AL West may have had the biggest blockbuster trades and signings this offseason, that includes players who left the division. The Mariners were busy, inking reigning Cy Young winner Robbie Ray. They also traded for 2B Adam Frazier, OF Jesse Winker, and INF Eugenio Suarez, but did see 3B Kyle Seager retire. The ‘Stros brought back P Justin Verlander but said goodbye to SS Correa. The most fascinating team was the Texas Rangers. They signed SS Corey Seager and 2B Marcus Semien while trading for power hitter INF Brad Miller. On the other end of the spectrum, the Athletics lost just about all their valuable assets. It started when Bob Melvin decided to head down to San Diego to manage the Padres. What followed was a fire sale of star players like 3B Matt Chapman and 1B Matt Olson.

The Astros have owned the AL West for the last half-decade, but I predict a new champion will sit at the top at the end of this season. I think Seattle has the roster and the talent to make a serious push. The Rangers are much improved and have stars to hang around and it’s starting to feel like a make-it or break-it situation in Anaheim with Trout only getting older.  Division Winner – Mariners – 94-68