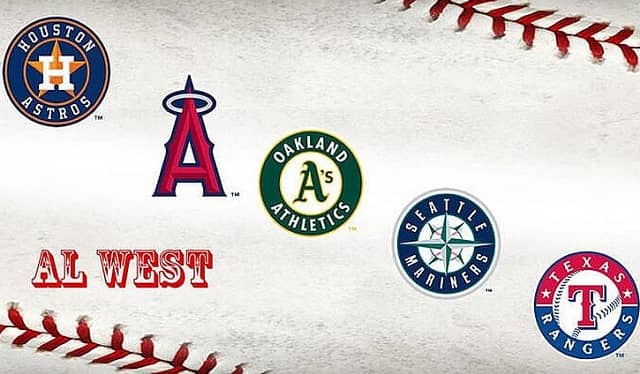 It’s almost time to “play ball” as the 2021 Major League Baseball season gets underway April 1.  That’s great news considering we were given the short end of the stick with last year’s 60-game COVID-shortened season. The excitement for the game of baseball seems to be heading in the right direction with a new crop of exciting, young players. There are new teams who are gunning for the top of divisions and new rivalries that should bring a spark. We will break down every division as the season gets closer. Here’s the AL West.

Maybe this is the year that someone knocks the cheating Houston Astros off the top of the ladder. The city of Houston is already enduring a sports meltdown since the beginning of 2021 with the Houston Texans loss of JJ Watt and the DeShaun Watson “massage” debacle, not to mention James Harden leaving the Houston Rockets, so this would be the cherry on top. The Astros didn’t win the division last year, but they still took the Rays to seven games in the ALCS before losing out on a chance to play in their third World Series in four years.

I expect that the Los Angeles Angels will be the team to step up this year in a big way. Joe Maddon has had success everywhere he has managed and entering year two with the Angels, he has a talented roster. Stacked at the top with baseball’s best player Mike Trout, they also have Anthony Rendon and Jared Walsh.  David Fletcher takes over at shortstop for the departed Andrelton Simmons. Veteran outfielders Dexter Fowler and Justin Upton will provide stability, while aging certain Hall-of-Famer Albert Pujols can still provide the occasional pop. This lineup is built for power and we expect to see that from DH Shohei Ohtani who will also have a spot in the rotation. The biggest question for this team is whether the starting rotation, led by Dylan Bundy, will be good enough to get the job done down the stretch.

They may not finish first but there is no writing off the Astros. They lost George Springer in free agency to the Toronto Blue Jays and ace Justin Verlander will miss the entire season after having Tommy John surgery last fall. However, they still have former AL Rookie of the Year Yordan Alvarez in the outfield and Kyle Tucker impressed there as well last year. Also, let’s not forget that this is still a roster with Alex Bregman, Jose Altuve, Zach Grienke, Lance McCullers Jr., and Carlos Correa.  Although they may not have Correa past this season as he turned turn the Astros initial contract extension offer and indicated that if a deal isn’t done by opening day, he will hit the free agency market after the season. While this is not a team that is going to win 107 games like they did in 2019, they will still be near the top.

Next up, I have a battle for third place between two teams that may surprise you. Yes, the Oakland Athletics are coming off a season in which they won the division, but the Seattle Mariners are going to be gunning for them. Let’s start with the A’s who are bringing back Matt Chapman and Matt Olson who are two very good hitters to have to face in this lineup. I hate that they lost closer Liam Hendriks and set-up man Joakim Soria, as well as shortstop Marcus Semien.  However, they acquired Elvis Andrus from the Texas Rangers who still has plenty left in the tank to take over at shortstop. The team definitely needs some bullpen help, and like every team not named the Dodgers, they could also use some starting rotation help. However, as we all know, the A’s never look all that impressive on paper and end up shocking us.

I think that the Mariners will bring some shock factor as well. They have 2020 AL Rookie of the Year Kyle Lewis ready to do more damage while outfielder Jarred Kelenic, MLB’s fourth best prospect, will be called up sooner rather than later. There is a nice youth movement going on in Seattle with Evan White, Justus Sheffield, and Lewis. The team’s most prominent offseason move is more about setting up for 2022 and beyond.  The inked a multiyear deal with veteran ace closer Ken Giles, who was one of the most dominant closers in baseball before undergoing Tommy John surgery last fall.  While they aren’t ready to turn all of this youth in a wildly successful season just yet, they will be banging on the door very soon.

Last, literally, are the Texas Rangers. This teams bears zero resemblance to the 2010’s team that made the playoffs five times in seven seasons, including two World Series appearances. Make no mistake, Texas is in full rebuilding mode.  That was made perfectly clear when they traded pitcher Mike Minor at the deadline last season and Lance Lynn in December. It was cemented when they traded Elvis Andrus, the last link to the playoff teams, in February. They also released floundering 2B Rougned Odor this week. They are just going to have to be okay with not winning many games as they will challenge the Pittsburgh Pirates for the worst record in baseball.  Their one decent player – Joey Gallo – may be mid-season trade bait.  They do have some young talent, but it will be 2022 before most of it hits the field on a full-time basis.