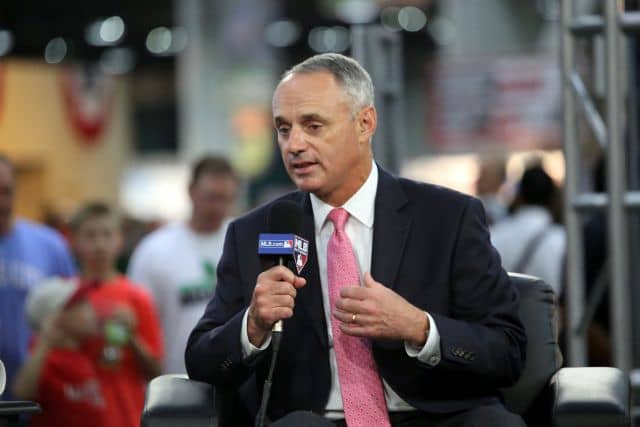 According to multiple sources, Major League Baseball has sent a proposal for a 60-game season at full prorated pay to the MLB Players Association.

While the deal is not done, the latest offer is seen as significant progress considering where the parties were a few days ago. Under the proposal the season would begin July 19 and includes an expanded playoff format.

Manfred confirmed in a statement that he and MLBPA executive director Tony Clark met Tuesday, saying the session produced the framework of a deal.

“At my request, Tony Clark and I met for several hours yesterday in Phoenix,” Manfred said Wednesday. “We left that meeting with a jointly developed framework that we agreed could form the basis of an agreement and subject to conversations with our respective constituents. I summarized that framework numerous times in the meeting and sent Tony a written summary today.

“Consistent with our conversations yesterday, I am encouraging the Clubs to move forward and I trust Tony is doing the same.”

MLB had made three proposals to start the 2020 season and the players’ union two, and the sides were about $1 billion apart in guaranteed salary. Players were set to earn $4 billion in salaries before the coronavirus outbreak began.

The union had cut off talks Saturday, a day after MLB’s previous proposal, and said additional negotiations were futile. Players told MLB to unilaterally set the schedule, but Manfred said the league would not while there was a threat of a grievance.

“I’m not confident,” Manfred told ESPN’s Mike Greenberg. “I think there’s real risk, and as long as there’s no dialogue, that real risk is going to continue.”

The sides reached a deal March 26 in which players agreed to prorated salaries, part of an agreement that included a guarantee of service time even if no games are played this year.

Teams say they need more pay cuts to afford to play in empty ballparks. Players say they will not accept additional salary reductions.

On Saturday, the day after MLB delivered a return-to-play proposal that called for a 72-game season and guaranteed 70% of players’ prorated salaries (with a maximum of 83%), MLBPA lead negotiator Bruce Meyer said in a letter to MLB deputy commissioner Dan Halem: “Given your continued insistence on hundreds of millions of dollars of additional pay reductions, we assume these negotiations are at an end.”

Clark followed with a statement asking the league to use its right from the March 26 agreement to set a schedule, saying: “It unfortunately appears that further dialogue with the league would be futile. It’s time to get back to work. Tell us when and where.”

Numerous players echoed Clark on Monday in response to Manfred, tweeting, “Tell us when and where.”