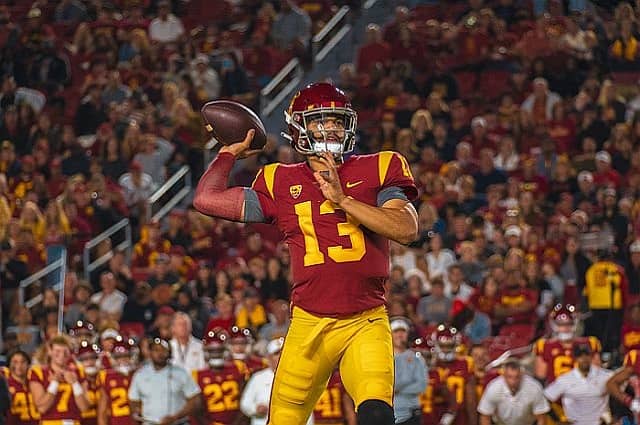 The Heisman Trophy 2022 Candidates have been announced as four players will travel to New York City with the hopes of walking away with the famous award. There were some surprises and a few players left out which seemed to anger America. The four finalists are USC’s Caleb Williams, TCU’s Max Duggan, Georgia’s Stetson Bennett, and Ohio State’s C.J. Stroud.

The outrage mostly came from Tennessee’s Hendon Hooker being left off the finalist list. His stats are better than Bennett’s and he led the Vols to an incredible season. However, he wasn’t chosen and Bennett “the Mailman” will make the trip to Manhattan instead. With that being said, I don’t believe there is much hope for Bennett to win, so let’s break down the other three candidates.

Clearly the flashiest name on this list, Williams was stupendous in his first season at USC. He passed for 4,075 yards and 37 touchdowns.  He added another 372 yards and 10 scores on the ground. Williams set a record for most touchdowns by a first year Trojan quarterback which is remarkable when you think of all the impressive names that have walked onto that field. Williams came up short in the Pac 12 Championship game and had a situation with some

writing on his nails which I could see voters being weary of. You can point out a list of players and say that there were few more meaningful players to their team than Williams was to USC. He came in as the hot transfer following Lincoln Riley, he signed a flashy NIL deal, and he delivered. Riley has a history of creating Heisman winners so it should come as no surprise that Williams is the favorite.

When I think of heart and grit, I think of Max Duggan. If you watched the Big 12 Championship game, it was evident that he left everything he had on the field, although it still wasn’t enough. TCU was the total shock in college football in 2022. It was a season no one saw coming and it was their offense which led them to new heights and made them so exciting to watch. While the Big 12 is often discredited, it was a good conference this year and Duggan led his team to many great wins and close finishes. He ended up passing for 30 touchdowns and 3,321 yards.  He tallied another 404 yards on the ground with six additional scores. I’d argue that Duggan did more with less and wins the shock factor here.

Ohio State made the College Football Playoff but their loss to Michigan in the final regular season game really hurt Stroud’s Heisman stock. I have a hard time imagining the voters could overlook their final view of Stroud on the field where his team mustered only 23 points and he threw two critical interceptions. This season, he threw for 3,340 yards and 37 touchdowns, making himself the most efficient passer out of this class of quarterbacks in a conference where defense is king. Stroud is likely headed to the NFL, and he could be successful there, but my prediction is he doesn’t leave college with a big trophy.