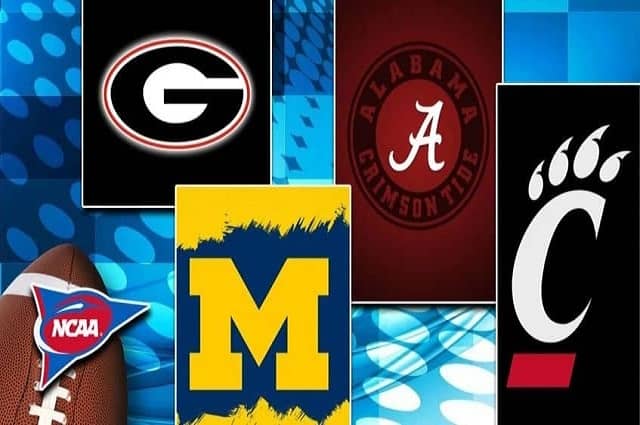 The time has finally come for the College Football Playoffs. It’s great to see a couple of new faces this year – hello Michigan and Cincinnati. This is the first year that a Group of Five team has made the playoffs. It should be fun, and it certainly is different, which is what everyone wanted and was crying for with this system. Let’s break down the two games and hand out our College Football Playoffs Predictions

Michigan and Georgia. Two elite programs in college football making an appearance in the second most important game of the year. The Wolverines seemed like they were ready to fire coach Jim Harbaugh just a year ago and now they have him coaching the team in their most important game in over a decade. The Bulldogs are back for the first time since the 2017 season when they lost the National Championship game 26-23 to Alabama in overtime. They were the force to be reckoned with all year in college football and then they suffered an embarrassing loss to Alabama in the SEC Championship.  They will now need to flex their muscle if they want a likely rematch in the National Championship. Georgia’s defense must show up in this game, something it didn’t do in Atlanta a few weeks ago. They allowed Bama to put up 536 yard and 41 points in an absolute beatdown of a contest. This will have to change against a Michigan team that scored 59, 42, and 42 in its last three games. The Wolverines are also the owners of an impressive defense that has allowed 48 points over its last three games. This one comes down to the Georgia D-Line and the Wolverines O-Line and how much time Wolverine QB Cade McNamara will have to operate the offense. I am siding with the ‘Dogs. Prediction: Georgia

Funny that Cincy is the only undefeated team here, yet they are ranked 4th. I am not going to get caught up on that as I am just happy that they have a seat at the big table. Cincy is a Cinderella story and unfortunately this isn’t college basketball. While Bama has only lost one game – to Texas A&M – they have shown weaknesses throughout the season, and they’ve had more than one close call.  However, it just feels like the talent levels are different with these two teams. It will take a flawless game from the Bearcats offense and defense and a masterclass of a gameplan from Luke Fickell to take down Alabama. While I haven’t been sold on this team all year long, this is Nick Saban that we are talking about. The mistakes don’t come often, and I have a feeling that they aren’t going to be on display in this game. I have a feeling that a Bama team that has heard all the negatives about them will be hungry to show them why they deserve a spot in the national championship. For whatever the Bearcats do on offense, I’m not sure it’s going to be enough to take down a ton of 5-Star recruits who will be playing in the NFL very soon. All we can hope for in this game is a competitive match and one that proves Cincy belonged here all along. Prediction: Alabama