For the second season in a row, Clemson was named No. 1 in the preseason Amway Coaches Poll from USA Today.

Last year, the Tigers turned that into a championship-game run but fell short to LSU in the title game. Quarterback Trevor Lawrence will be trying for his second title before he presumably heads to the NFL.

“You’ve got to look back on what you’ve done — we’ve done some great things and we’ve got a lot more in store, for sure,” Lawrence told USA Today Sports. “It sucks not getting to finish the way you wanted to [last season], but we’re going to be fine. We’re going to be back.”

Said coach Dabo Swinney of Lawrence to USA Today Sports: “This is a great opportunity for him to lead and respond. He’s had unbelievable success and done so many great things. He’s going to be a hard guy to beat – forever. He’s special.”

Defending Big Ten champion Ohio State checks in at No. 2. The Buckeyes lost to Clemson in the semifinals last season.

Alabama and Georgia are Nos. 3 and 4, followed by defending champ LSU, which won’t have superstar quarterback Joe Burrow this season after he was drafted at No. 1 by the Cincinnati Bengals.

Rounding out the top 10 are Oklahoma, Penn State, Florida, Oregon and Notre Dame.

Oklahoma is seeking its fourth straight playoff berth after losing 63-28 to LSU in a Peach Bowl semifinal last year.

The SEC and the Big Ten each have six teams ranked in the top 25. The Big 12 and ACC, which includes Notre Dame for the 2020 season, have four teams. The only Group of Five schools to be ranked are the University of Central Florida and Cincinnati.

The poll is of course predicated on the fact that there will be a college football season. The coronavirus pandemic has already caused conferences to dramatically change schedules, and NCAA Division II and Division III schools have canceled their championships in fall sports.

The preseason Associated Press Top 25 will be released Aug. 24. 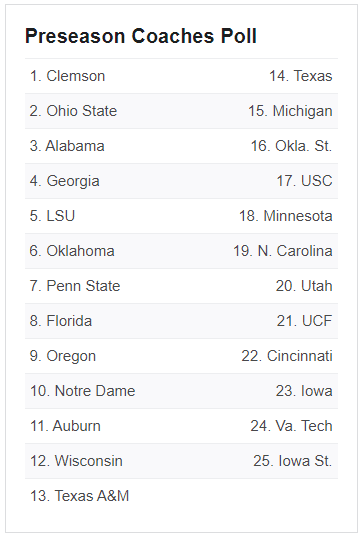 Tailgate Games for the Homegate!