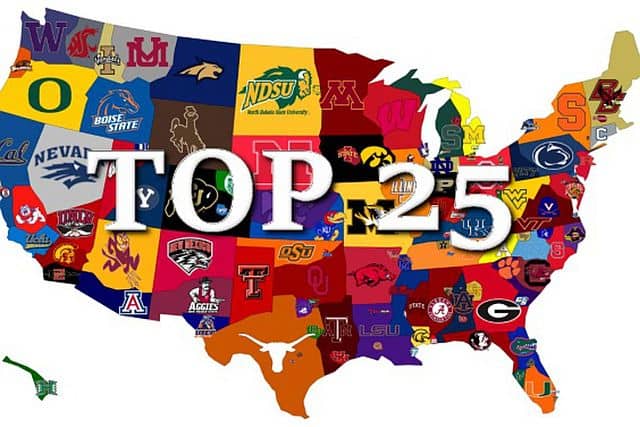 SEC Dominates Top Half of Rankings

Once again, Clemson is the preseason No. 1 in the AP Top 25.  This year’s version features nine Big Ten and Pac-12 teams. None of which will be ranked once the season starts since they won’t be playing due to their mutual decision to cancel their seasons because of the coronavirus pandemic.

Ohio State was a close No. 2 followed by SEC teams Alabama and Georgia. Defending national champion LSU, another SEC team, is No. 6.

Without a doubt, the 85th edition of the AP rankings will be like none before.

When the season starts — if the season starts – Ohio State and 53 other Bowl Subdivision teams will no longer be eligible for inclusion in the Top 25 because they have postponed their seasons until the spring.

The Big Ten, where Ohio State and No. 7 Penn State play, and the Pac-12, home to No. 9 Oregon, cancelled their fall sports seasons because of concerns about the coronavirus.

The SEC, ACC, Big 12,  American Athletic, Conference USA and Sun Belt are forging ahead with fall sports, with changes. The three remaining Power 5 conferences, the SEC, ACC and Big 12, have eliminated all or most nonconference games and delayed the start of their seasons from one to three weeks.

Erased from the college football schedule this year was a host of tantalizing nonconference matchups: Ohio State at Oregon; No. 10 Notre Dame vs. No. 12 Wisconsin  at Lambeau Field in Green Bay; No. 14 Texas at LSU; No. 17 USC vs. Alabama in Arlington, Texas; and No. 11 Auburn vs. No. 18 North Carolina in Atlanta.

For now, big conference games such as Ohio State-Michigan and Washington-Washington State could still be made up in the spring.

All Division I teams were eligible for the preseason AP Top 25, but after the season starts, only teams scheduled to play in the fall are eligible. That leaves 76 FBS teams from which to choose.

If a spring season is played, the AP will consider doing rankings for those teams too.

As usual, the SEC leads the way with seven teams in the Top 25, including six of the top 13 teams.