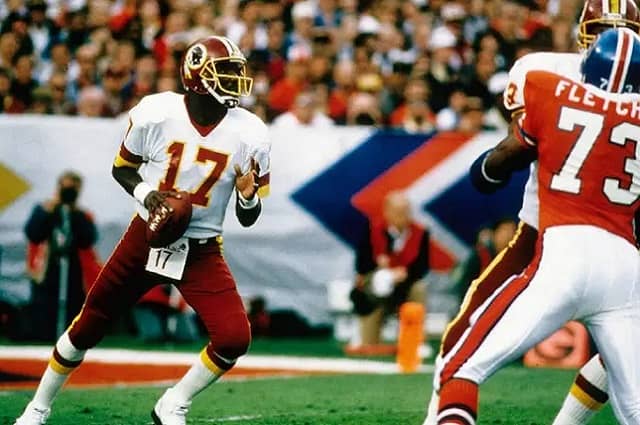 With Super Bowl LV (55) just over a week away, it’s easy to imagine that we might witness an all-time performance from someone like Tom Brady or Patrick Mahomes. There are so many talented players on both teams and on both sides of the ball.  It feels like there are a ton of future Hall of Famers in this game.  The Super Bowl is a chance for players to show up on the big stage and it takes us back to some of the greatest jaw-dropping accomplishments in previous games. Here are the Top 5 Super Bowl performances of all-time.

This is known as the game with one of the greatest tackles ever made that secured the victory for the Rams.  However, the Greatest Show on Turf was powered by Warner in this game, and it was an incredible performance that he put on. Only four years removed from being a grocery-store clerk, the former Arena Football star put up a then-Super-Bowl-record 414 yards passing and two touchdowns without throwing an interception. The Titans had a fierce defense, but they couldn’t stop Warner in this game.

Doug Williams took the 1979 Tampa Bay Buccaneers to the NFC Championship game. However, it wasn’t until he joined the Washington Redskins that he played in the big game. Trailing 10-0 after the first quarter against the Broncos, Williams had an absolutely dominant performance in the second quarter as he threw for 228 yards and four touchdowns in the quarter to essentially end the game by halftime as the Redskins took a 35-10 lead to the locker room. Williams took home the Super Bowl MVP honors with 340 yards passing.

Jerry Rice won three Super Bowls during his time in the National Football League, but no performance was more impressive than the one he had in Super Bowl XXIII. The 49ers found themselves tied with the Cincinnati Bengals at 3 going into halftime. But then Rice turned it on and put on the greatest receiving performance of all-time in the Big Game. He reeled in a record 215 yards and a score and was instrumental on the final game-winning drive where he caught a clutch first down pass on a second and 20. That performance earned Rice MVP honors.

The 1983 Washington Redskins run defense was the league’s best during the regular season.  Did that concern Marcus Allen?  Not at all.  He cruised for 191 yards on only 20 carries as the Oakland Raiders crushed Washington 38-9. A spectacular 74-yard run on the final play of the third quarter secured the victory and was the longest run from scrimmage in Super Bowl history until Super Bowl XL. Allen added another five-yard touchdown run and two receptions for an additional 18 yards in securing MVP honors for the game.

The 49ers are one of the greatest franchises ever, so of course they are ending up on this list more than once. Steve Young tried for a long time to prove his worth to the 49ers, but it seemed like he was forever going to live in the shadow of Joe Montana. That was until he had the game of his life in this Super Bowl and threw for an NFL-record 6 touchdowns in the game. He threw for 325 yards and rushed for another 49. Young finally got his Lombardi Trophy, while also earning MVP honors, and the Niners became the first team to win 5 Super Bowls.