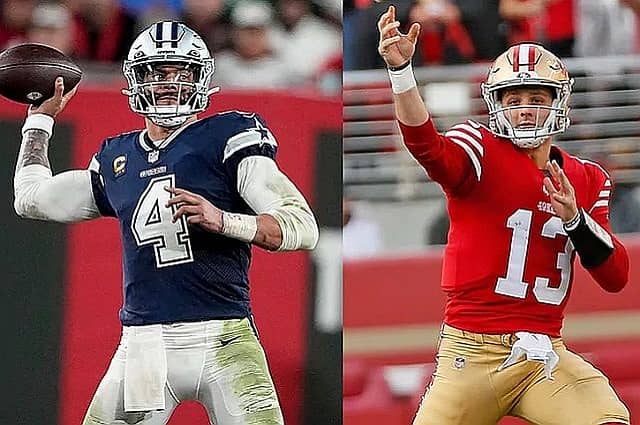 The Tampa Bay Buccaneers and Tom Brady have been eliminated, Kirk Cousins proved once again that he and the Minnesota Vikings can’t succeed outside the early game window, and the Seattle Seahawks gave the San Francisco 49ers fits.  For the first half at least.  Now we shift gears to the second round. Let’s break down the 2023 NFC Playoffs Divisional Matchups.

It looked like the Niners were going to be on upset alert early in their game against the Seattle Seahawks, but the offense turned it on in the second half, finishing with a rout of the Hawks, 41-23. Brock Purdy’s numbers looked great by the game’s end, but his performance didn’t match that in the beginning. Dallas has a beast of a defense and they completely shut down Tom Brady and Tampa Bay. If you don’t consider a garbage time touchdown, they allowed Tampa just six points through most of the game while Dak Prescott cooked the Tampa defense that’s been so good all season.

I thought Purdy would show some rookie hesitance last week and he did. Now facing a much better opponent than Seattle, a few mistakes will be tough to come back from. Playing on the road isn’t the way Mike McCarthy would have liked this game to go down, and they have two less days of rest, a seemingly unfair disadvantage. While I worry about Purdy, Prescott hasn’t been a playoff guru outside of last week’s performance. Give me an epic game, and a big win for the young stud.

No. 1 Philadelphia Eagles vs No. 6 New York Giants

New York has been a sensational story this season. Brian Daboll has led a total turnaround for the Giants, and he has Daniel Jones playing at a level we haven’t seen before. This shouldn’t be a total shocker as he is the coach responsible for whipping Josh Allen into shape as well. New York has a top-notch defense but if their offense performs the way they did last week, this game could be even closer than we are anticipating. Vegas has Philly, who was off during the first round, as 7.5-point favorites.

Jalen Hurts getting some rest after missing a few weeks down the final stretch before returning in Week 18 was critical to this Eagles team that boasts the most explosive offense in the National Football League. There are some concerns however, including their Week 18 win over the Giants where New York rested all their starters and Philly won by just six points. The key to this game will be taking away Saquon Barkley and forcing Jones to make all the big plays. Philly had the best passing defense in the league this season, but Jones is coming off the best performance of his career. Momentum is everything, and New York has it, but a well-rested Philly team is a scary thought and Hurts will continue his MVP level performances in this one.