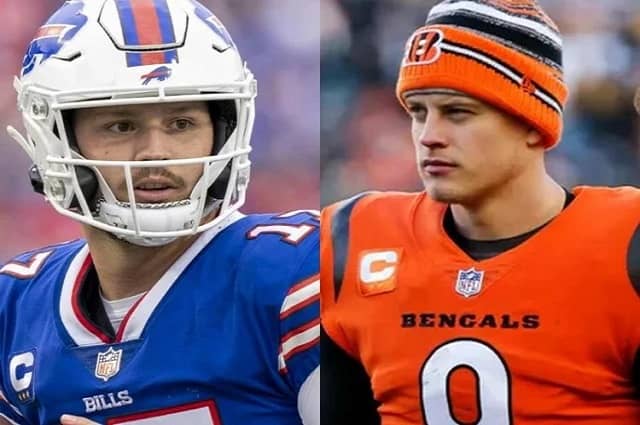 The AFC Wild Card Weekend gave us three great games. It isn’t every day that we are treated to a 27-0 comeback in a playoff game, but the LA Chargers did that thing where they Charger’d the game away and let Jacksonville move onto the divisional round. The Buffalo Bills had a true scare from the Miami Dolphins but managed to escape and the Cincinnati Bengals needed an improbable defensive touchdown to pull out a win against the Baltimore Ravens. It sets up two games this weekend with four of the best quarterbacks of the future. Here are the 2023 AFC Playoffs Divisional Matchups.

No. 1 Kansas City Chiefs vs No. 4 Jacksonville Jaguars

The Chiefs are the biggest favorites this weekend as an 8.5 favorite against the Jaguars who used an incredible second half comeback to upset the Chargers and advance. Trevor Lawrence was both pitiful and brilliant in a game where he threw four touchdowns and four interceptions. The Jacksonville defense has been inconsistent all season and it was no different in this game as the first half was a train wreck and the second half was a master class. Here’s the thing: that happened against the Chargers. If the Jags fall behind in a game against Andy Reid’s Chiefs, they might as well start the buses at halftime. This KC team is special. Both sides of the ball excelled this season and now they are coming off a week of rest and could be getting key offensive players back from Injured Reserve this week.

If Jacksonville has anything working for them, it’s momentum from the way they have won games down the final stretch of the season. They had an overtime win against Dallas after a big comeback, a must-win performance in Week 18 where they came back against Tennessee, and of course last week’s affair where they did the unthinkable. Jacksonville has America rooting for them, but the Cinderella story rarely ends in a feel-good way.

No. 2 Buffalo Bills vs No. 3 Cincinnati Bengals

For a brief moment on Sunday, it looked like both the Bills and the Bengals were going to lose, but both teams gutted out wins that took nearly the entire game. Facing a divisional foe in round one isn’t a walk in the park, so I give both teams a pass, and hope that they play better this week. We have a rematch of the game that was cut short due to Damar Hamlin’s tragic injury in week 17 which left players in shock as they watched their teammate receive CPR.

With that behind them, winning is the only focus. The Bengals will have to endure one of the toughest road atmospheres in the National Football League as the Bills Mafia should be in full roar come game time. If Buffalo has their offense working, they can exploit a Cincinnati defense which has taken a major step backwards this season. They ranked just 16th overall as a defense and 23rd against the pass. Eli Apple is a total liability in the secondary and I would expect Josh Allen to target his matchup early and often.