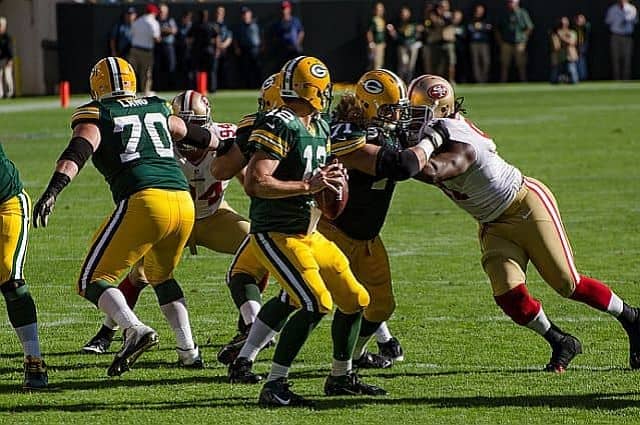 It’s time to cue up the Monday Night Football theme song, watch those highlights that get you amped, and prepare for the 2022 NFL season. We had an incredible season to watch in 2021 including a few playoff games that may go down as all-time classics. There is an exciting rookie class coming into the league, TONS of star players flipped teams, and the action should be second to none. We’re here to hand out divisional previews. Here’s our 2022 NFC North preview.

The Green Bay Packers were the best regular season team in the NFC in 2021. Aaron Rodgers had a mad-man season after it looked like he had played his last game as a Packer, but he returned, won MVP, led the Packers to the postseason.  Then, they were upset by the 49ers at home in the divisional round. There wasn’t a whole lot of quality competition for the Packers last season. They had 13 wins and the next best team, the Vikings, had just eight. That was followed by pitiful performances by the Chicago Bears and the Detroit Lions. Chicago was able to win just six games with the QB combo of Justin Fields and Andy Dalton. Meanwhile, Detroit had Jared Goff under center, and he looked much more like a Lion than a Ram. Dan Campbell did deliver three wins to a starved franchise, but at the end of the season, this division wasn’t all that different. The Packers were on top.

This isn’t necessarily a question. The Packers are once again the favorites to win, and they will likely do that again. Aaron Rodgers did lose more wide receiver weapons and it feels like his team hates giving him any help through the draft, but they have a great running backs room, and their defense has been solid over the last few seasons. Next up would probably be the Minnesota Vikings who return Kirk Cousins and have a new head coach in Kevin O’Connell who comes over from the reigning champ LA Rams. The Bears and the Lions are a long, long way away from winning meaningful games and putting together a real, successful season. The Bears have a new head coach in Matt Eberflus who comes with better reviews than former coach Matt Nagy.  The Lions are likely to be sitting in the dumps until they make a serious change at the QB position.

I just said that the Bears are a long way away from a winning season, but this is an important year for QB Justin Fields. He has a new head coach and is under a new regime. A lot of times, a new coach and new GM want to pick their own quarterback so Fields could play himself into a backup position if he doesn’t quickly prove that he can be the long-term answer for the Bears at the position.

Rodgers used to cheer on Smith from the sidelines, but now he will look to avoid him by any means necessary as he chases him around in purple and yellow. LB Smith signed a nice deal with the Vikings and brings a much-needed veteran presence to Minneapolis.

There is no doubt in my mind that the Packers will win the division for the fourth straight season. They haven’t had a ton of competition in recent years, and I am not expecting that to change. Record: 13-4