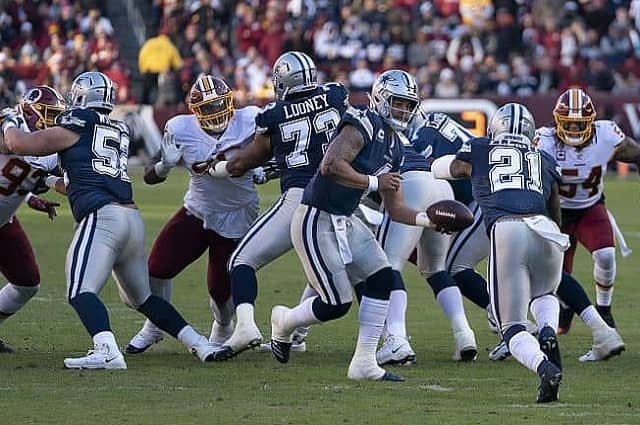 It’s time to cue up the Monday Night Football theme song, watch those highlights that get you amped, and prepare for the 2022 NFL season. We had an incredible season to watch in 2021 including a few playoff games that may go down as all-time classics. There is an exciting rookie class coming into the league, TONS of star players flipped teams, and the action should be second to none. We’re here to hand out divisional previews. Here’s our 2022 NFC East preview.

The NFC East has not been considered a strong division in recent years, and the same was true in 2021. The Dallas Cowboys had a nice bounce back year as they had a healthy Dak Prescott. However, falling to the 49ers in the playoffs in the most embarrassing way possible left all Dallas fans with a sour taste in their mouths. Despite that, they still put together a 12-5 record and saw the emergence of players like LB Micah Parsons and RB Tony Pollard. After Dallas, there was a steep drop-off with the next best team, the Philadelphia Eagles, coming in with a 9-8 record and sneaking into the postseason. The Washington Commanders and New York Giants were once again major disappointments and there is a chance that they could be entering make or break years for some important personnel based on their performance in 2021.

The Cowboys will once again be the favorites to win the division, but there were some major additions in the division that could challenge them. For starters, the Commanders traded for QB Carson Wentz who showed positive signs in Indianapolis last year. The Giants brought in head coach Brian Daboll who was the mastermind behind QB Josh Allen in Buffalo the past few seasons. The Eagles made a huge move on draft night by getting WR A.J. Brown, one of the best young receivers in the game who can be paired with fellow WR DeVonta Smith to give QB Jalen Hurts some help. The Cowboys didn’t make any big splashy moves but did lose WR Amari Cooper and DE Randy Gregory, two pieces that could be tough to replace despite being the favorites to repeat as division champs.

Wentz is the most significant upgrade in the division and realistically could create a challenge for Dallas. If we see the Wentz that we saw in 2017, the Commanders have a great shot at making the playoffs with a very loaded defense. However, if Wentz shows signs of carelessness that we have seen from him the past few seasons, he is not only tanking this current roster but could force Ron Rivera out of town.

The 2021 Rookie of the Year was good enough to have the entire league talking non-stop. Parsons was a dynamic linebacker who is just getting started and already projects as a playmaking defensive genius that could etch himself into the Dallas record books. Parsons is already the leader of a Dallas defense that was greatly improved under DC Dan Quinn.

My prediction is that the Eagles flip the script on everyone and come out hot under Hurts and an offense that made a couple of major additions. Dallas will give them a run for it and keep it close, but I like Philly just edging them out. Record: 11-6