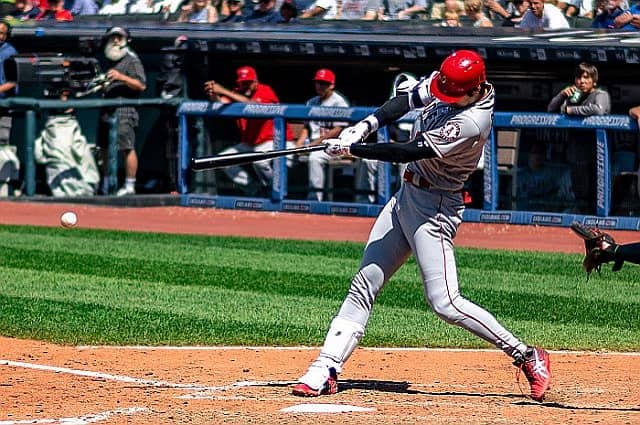 Baseball is America’s Favorite Pastime, so it feels natural that we go back in time and pay respect to some of the greatest players the game has ever seen. For the last five weeks we have identified the best players from each of the last five decades.  Let’s wrap it up with a look at this current decade. To be included as a future top player, they must have at least a game of MLB experience. Here’s the 2020’s all MLB team.

We had to create this category because there is no other player like Shohei Ohtani. He can hit and pitch and he can do them both extremely well. He ran away with the MVP award in 2021 when he batted .257 with 46 home runs and drove in 100 runs. He then won nine games on the mound with a 3.18 ERA and 156 strikeouts.

Perez has been a star in the league for about a decade, leading the Royals to a pair of World Series trips in the mid-2010s. Since 2020, Perez has turned the power on, hitting a league-high 48 home runs in 2021, which set the record for most homers in a season by a catcher. Perez is the heart and soul of the Royals.

It was shocking that Freeman left the Atlanta Braves this offseason after the Braves won a world series. Freeman was the unit that made that engine run for the Braves and has been a menace at the plate. He won the MVP in 2020 during a shortened COVID year, and he followed that up with a performance in ‘21 where he went to an All-Star game. He can do just about everything at the position.

It’s been a journey thus far for the second baseman who has been with three different teams to begin the decade. 2021 was his breakout year where he finished in third in MVP voting and hit 45 home runs. He was rewarded with a massive contract with the Rangers that hasn’t worked out so far, but he has plenty of time to right the ship.

Devers has been solid for the Red Sox since entering the league, and if he keeps up these numbers, he could go down as a Red Sox all-time great. He has been to an All-Star game and won the Silver Slugger in 2021. His defense only continues to improve with more experience, and he sits as a scary man in the middle of the Sox lineup. Not only does he hit for power, but also average and is a menace in Fenway.

There are a bunch of great names here that we could have included, but Tatis Jr. has star power like we haven’t seen from the others. While he has yet to win an MVP, he will be a perennial contender for years to come. In 2021, he belted 42 home runs, drove in 97 runs, and won the silver slugger. He signed a massive deal that will make him the star of the game in San Diego for years to come.

I know, this feels like a surprise but there really aren’t a ton of left fielders that carry a ton of star power through the first two years of the decade. O’Neil has really burst onto the scene in recent years for the Cards, he received MVP votes in 2021 when he batted .286 and belted 34 home runs. He has an incredible knack for fielding which netted him a Gold Glove in 2020 and 2021.

This one is going to stay in Trout’s circle, even though he hasn’t been able to stay on the field nearly as much as he would have liked. Trout is likely going to win another MVP in this decade, but we can all agree that we would much rather him have a World Series appearance more than anything else. To this point, there is no better 5-tool prospect in baseball than Trout.

I am going with Soto over Mookie Betts who I won’t even list as a future star since he is an established face of the league. Soto, however, has been the guy to lead the Nationals to some incredible runs and has backed it all up with his bat and glove. He has been top-5 in MVP voting the first two years of the decade as well as hitting .351 and .313. He’s been to an All-Star game and won two silver slugger awards.

This will likely change in a year or two as the DH has expanded to the entire league, but Martinez has been extremely important to the Sox over the last few seasons. In 2021, he batted .286, led the league with 42 doubles, and belted 28 home runs while driving in 99 runs. He works as a de facto swing coach with younger players, and loves hitting at Fenway.

When healthy, there is no better pitcher in the league than deGrom. He won two Cy Young awards in the last decade and nearly won two in the first two seasons in this decade. He had a 1.08 ERA to end his 2021 season and he was on the brink of doing something truly special before he was sidelined with an injury.

Hader has established himself as the best relief pitcher in the league over the last few seasons. He had a .835 WHIP in 2021 and posted 34 saves. When Hader enters a game, it pretty much means it is over. He is not even 30-years-old yet and should have several seasons of dominance ahead of him.