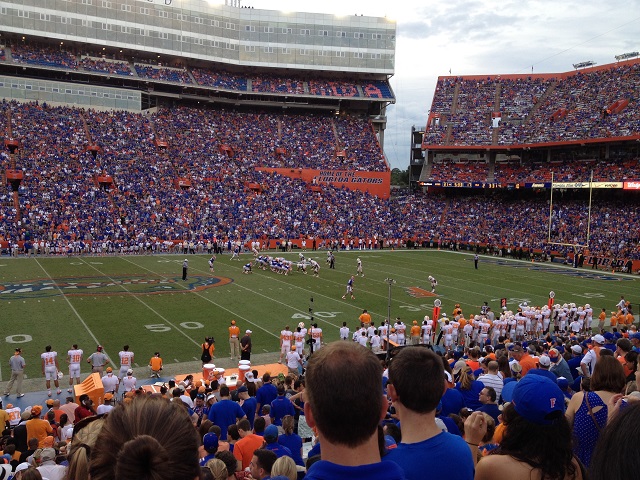 Like so many others, Steven Katona dreamed of enrolling at the University of Florida. But it wasn’t until his second semester as a student that he was able to attend his first football game.

Katona transferred to Florida from junior college and enrolled in Spring 2013. He spent his first months getting to know Ben Hill Griffin—AKA “The Swamp”—as he ran stadiums. Come the season opener against Toledo, he saw another side of his gym.

“I remember walking into the game and seeing The Swamp filled with people and just being like, ‘Oh my gosh, this is so insane,’” Katona recalls. “It was so fun from then on out.”

It’s an immersive experience that begins long before kickoff, with Gator fans tailgating from sunrise to sunset and beyond. The campus is a sea of orange and blue, with tailgaters spread out in The Plaza of Americas, along Museum Road, the North Lawn and other on-campus sites. Visiting fans won’t want to miss the Gator Walk, when the team enters the stadium, or simple pleasures like a game of cornhole.

“On game day, you can literally park your car almost anywhere as long as it’s off the street,” Katona says.

Once inside, the opposing team receives the brunt of the Florida sun, an intimidating factor for players unused to the heat.  “There’s a reason The Swamp is called The Swamp,” Katona says. “It’s hot, it’s sticky, it’s sweaty. There’s nothing like getting a few beers in you and standing in the sun. That’ll make you angry and want to yell. I think a lot of the reason the students get so fired up is because they’re hot.”