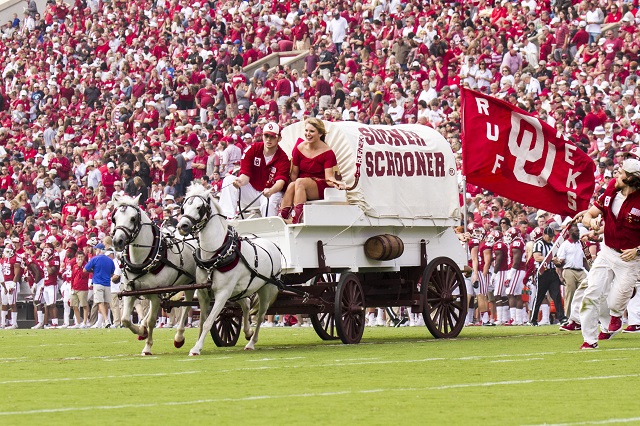 Some fans are raised not only with a team allegiance, but also access to its celebrations. Others begin tailgating later in life.

Billy Hutcheson landed somewhere in the middle. His first University of Oklahoma tailgate was four years before he enrolled: 2005 vs. Tulsa. But it began what looks to be a long tradition of cheering on the Sooners.

Hutcheson joined the Pride of Oklahoma drum line in 2009, when he was a freshman, and it remains a key part of his tailgating experience. Before each game, he attends the band’s pregame concert in front of Wagner Hall.

“Without attending, I feel that the game day experience isn’t complete,” says Hutcheson, who became a season ticketholder in 2015.

But it’s not just the traditions that make Oklahoma tailgating special. Hutcheson also points to the fanbase’s welcoming nature.

“Obviously, teams that are our rivals are not going to be invited as openly as say, a team that has not been to Norman in many years,” he says. “I have heard many personal stories from fans of Florida State, Tennessee, and most recently Ohio State that had an absolute blast in Norman and couldn’t say enough about how great the fans were, and making them feel at home.”