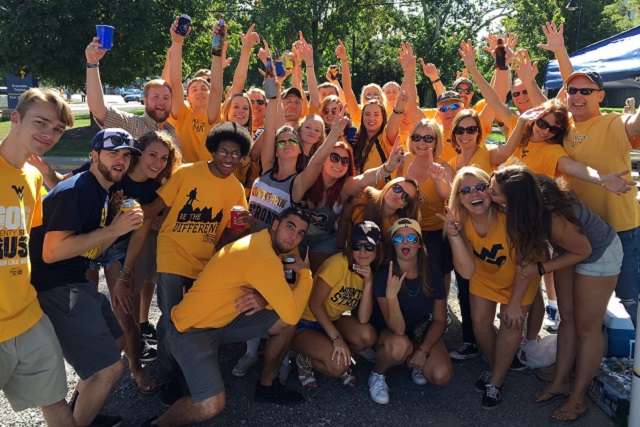 Let’s be honest. The trained chimpanzees sitting behind the computers at Tailgater Magazine have kind of ignored West Virginia over the years. However, the Mountaineers really deserve to be in the same conversation as many of the nation’s top football programs. For a small state like West Virginia, surrounded by larger states with major cities, Mountaineer football is a chance for West Virginians to show off for the rest of the nation.

“I think the Mountaineer pride and the Mountaineer spirit make it unique,” says Andrea “Andy” Joliet, a West Virginia graduate and co-author, along with husband Dave, of a blog dedicated to Mountaineer tailgating.  “It’s hard to describe, but when you’re there, it’s something you can feel and see and taste.

“Our passion is for the university and for Mountaineer football. It’s hardwired into us. We’re very passionate fans, and we love everybody. You know if I have food, you have food; if I have drink you have drink,” Joliet says. “There are no strangers. You feel like everyone’s family.”

The Mountaineers are the winningest program among college teams to never have won a national championship, so the Morgantown faithful are accustomed to quality football. However, the move to the Big 12 five years ago has helped raise West Virginia’s profile in much the same way as Texas A&M’s jump to the SEC. On the field, the Mountaineers have proven to be competitive with the likes of Texas and Oklahoma, which has only served to enhance the vibe around Morgantown on game days.

With a history that goes back 126 years, West Virginia football has a host of traditions and folklore such as the Mountaineer Mantrip player walk, the Pride of West Virginia marching band, and the Mountaineer mascot, which made its first appearance in the 1930s. But there’s one tradition Joliet treasures more than most.

“My favorite part of game day singing Take Me Home Country Roads in the stadium after the game,” she says, “because that means we won!”