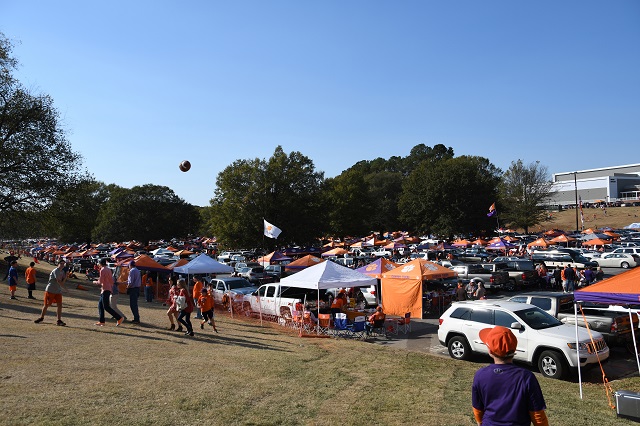 Clemson University did more than merely claim the “Death Valley” title last season. The home of the champs is also our champion and has always been in good standing with the tailgating community, as evidenced by our top five ranking last year.

Clemson’s gorgeous campus is even more incredible on game day as a blanket of orange covers the landscape from Bowman Field to the Brooks Center to Lake Hartwell, but being an east coast football fan is not for the faint of heart. When much of your team’s schedule sits at high noon, Friday night and Saturday morning can get a little fuzzy.

Fortunately for Dabo Swinney’s bunch, however, the program has become must-see, prime time television, so that’s where many future kickoffs figure to land.

Tiger fans have a lot in common with their southern SEC counterparts, and the shared tailgating culture offers a unique mix of both worlds. Despite an easier ACC slate, the Tigers have also taken that next step in college football’s modern leaderboard, as evidenced by their back and forth series with Auburn over the last decade.

Clemson fans have an interesting reputation as a fan base when they hit opponents’ cities. Ever since Georgia Tech refused to play Clemson in 1977, Tiger fans collect $2 bills stamped with an orange tiger paw to spend on the road – a clever bid to show their effect on the economies of their neighboring markets.

Clemson is home to some of the nicest fans in the country, who take pride in sticking to the essentials of the tailgate.

“We actually tailgate. As in, set up the food, the drinks and TVs on the tailgate of our trucks and cars. Seems like everywhere else you go, it’s only tents for miles,” says Clemson alumnus Fred Gilbert. “And we are able to leave the stadium at halftime, so tailgating occurs before, during and after the game.”

Another big selling point: the walk from The Quad to Memorial Stadium is one of the shortest on any college campus.

South Carolina heat in late summer to the early fall is fry-an-egg-on-your-tailgate weather, so if you can’t stand the heat, you’d better get the heck out of the tailgate. And since Clemson will be dishing some serious heat this fall, it’s only fitting that they’re our number one destination in 2017.