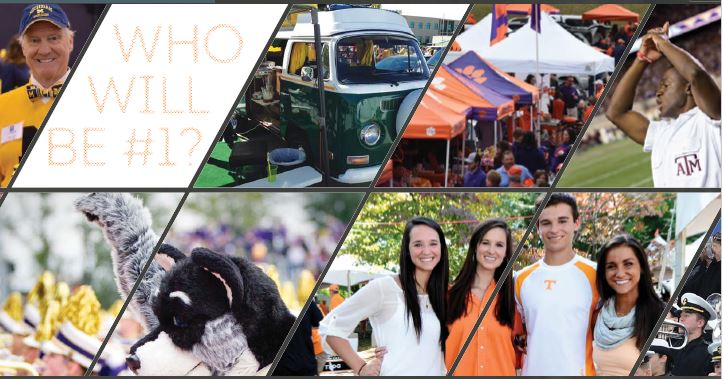 It’s not a surprise that a university whose football team is a frequent contender for the national championship would make this list. But Ohio State Buckeye fans bring more to the table than mere wins.  For one thing, tradition. If you’re not a Buckeye, you might know “The” Ohio State University as the school that insists on an article in front of its name. Or perhaps it’s the Best Damn Band in the Land’s tradition of “dotting the i” in the word Ohio that’s grabbed your attention. But oh, there’s more. 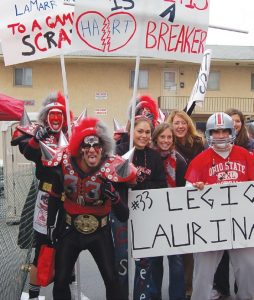 Try game day pep rallies, or skull sessions. Or the sound of 104,000-plus fans yelling in the Horseshoe. Or create your own traditions. That’s what Adam Studebaker and his wife, Amy Cornelisse, have done. The couple, both Ohio State graduates, bought a bus from friends and made it the center of their tailgating. A Buckeye-themed mural adorns the vehicle, and it’s a frequent backdrop for photos. (Studebaker says the image of Woody Hayes is a favorite.)

In years past, playing host meant the couple would have to show up as early as 3:30 a.m. to claim a tailgate spot, but in recent years they’ve had a reserved space. Now, they take their time and begin tailgating by 8 a.m., even for 8 p.m. games.

“It’s an opportunity to relive our college years and also an opportunity to see friends we only see during the football season. Ohio State fans are very passionate and loyal, thus they show every week regardless of the weather,” Studebaker says. “Fortunately, Ohio State usually wins so there is a lot of celebration.”

NO. 14 University of Notre Dame 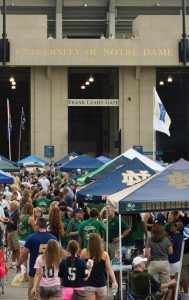 There are few college football programs as storied and as rich in history as Notre Dame. Seriously, those of us who aren’t Notre Dame fans who happen to know Notre Dame fans hear about the Fighting Irish’s cultural hold over college football almost constantly. It’s almost obnoxious, but there’s no point in denying it—football season in Golden Dome territory is magical.

The traditions are practically endless. There’s the victory clog after every home win, the Notre Dame Bagpipe Band blaring “Scotland the Brave” as the team enters Notre Dame Field and, of course, the famed pregame player walk that snakes throughout the campus and, eventually, into the stadium through the Tunnel gates in a tradition that dates back to 1931. If there is anything that symbolizes football at the House That Rockne Built, this is it. However, this dramatic entrance into Notre Dame Stadium isn’t just for players. On Fridays during football season, fans can experience the same thrill during a Friday Tunnel Tour. Tunnel tours run from 10 a.m. to 5 p.m. every football Friday, closing only during team walk-throughs. Tours are free and open to the public. If this doesn’t give you chills just thinking about it, check your pulse.

The Bison make a triumphant return to our Top 25 moving up one slot to No. 13 after making even more headlines in 2015 and getting an early start in 2016. After a week one setback to Montana, NDSU used that to fuel a 12-­1 run to a fifth straight FCS national title. Fans of the NFL also may have noticed Bison quarterback Carson Wentz who enjoyed a whirlwind offseason that ended with him being taken with the No. 2 pick in the draft to the Philadelphia Eagles. Impressive no longer describes North Dakota State, it’s become so much more than that. 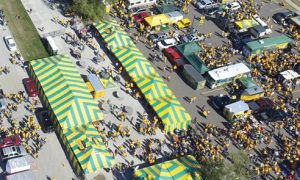 The Bison’s unprecedented success is something of an anomaly, and it has driven the Bison faithful to become one of the proudest fan bases in the country. Imagine if a D­-1 program won five national titles in a row. There would be riots in the streets and perhaps a national investigation. Instead, NDSU just keeps on winning and head coach Chris Klieman marches on towards Bear Bryant status at the Division II level. It seems like only a matter of time before a big time conference comes calling.

Until then, NDSU continues building its rich tradition. The Fargodome remains a house of horrors for opponents with only one leaving with a victory in the last 30-­plus match-ups. The home of the Bison will also look a bit different this fall with a few surprises for fans including a big board. “The new video displays will enhance an already electric game day atmosphere at Gate City Bank Field in the Fargodome,” says Senior Assistant Athletic Director Troy Goergen. “At 100 x 30 feet, the size and clarity of the video boards will drastically enhance the intro video, live action and replays.” The university will also add four other 15 x 22 foot corner displays that will allow flexibility for graphics, stats and other content sure to add even more to a top notch experience. Looks like College GameDay may have to make another trip to Fargo in the near future.

NO.12 University of Oklahoma 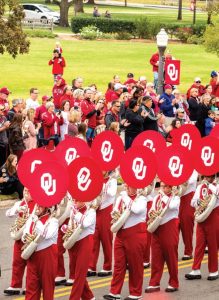 Despite the Big 12 Conference’s struggles to hang on to teams, the big dogs in the Big 12 know how to do college football Saturdays right. Arguably, the University of Oklahoma reigns supreme. A historically significant championship-level program, traditions galore and a rabid fan base make Sooner Country almost a mandatory item on any college football fan’s bucket list.

Seriously, college football is such a big deal in Norman that the Gaylord Family Oklahoma Memorial Stadium actually averages almost 2,500 OVER the stadium’s official capacity of 82,212. Fortunately, for those Sooner crazy fans who find themselves packed in like sardines, university officials announced plans to expand the stadium to 84,000, a $160 million renovation. Of course, this only applies to those who actually want to venture inside the stadium. The tailgating around the stadium is epic, and this being Oklahoma, the star of the party is beef. If they’re not riding or roping it, they’re grilling and smoking it. By God, that’s the way it ought to be.

Inside the stadium, Sooner fans get to enjoy some of the most celebrated traditions in college football, such as the firing of the ceremonial 12-gauge shotguns at each home game and the Sooner Schooner. A 1923 Model T Ford christened the Big Red Rocket, the Sooner Schooner has been an important part of Oklahoma home games since 1950.

NO. 11 University of Washington

Husky fan or not, tailgating or sailgating at the University of Washington is something to behold. From the waves of Lake Washington to the majestic heights of the Cascades, pregame is a feast for the eyes. 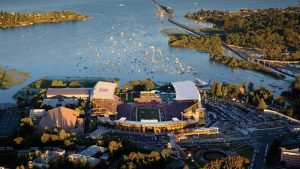 courtesy of © 2015 University of Washington/Denise Wise

If the rest of you is hungry, tailgaters offer up all the usual grilled sensations with salmon adding a touch of the northwest. For visitors or fans that don’t want the hassle, you can also reserve a spot on a restaurant boat that joins the tailgating fleet of faithful Huskies. For land lovers, The Zone offers up family friendly activities in the East Practice Field of Husky Stadium starting three hours before the game. Young Husky fans are always excited for an opportunity to meet the school mascot. Dubs (short for UW) is the live mascot of the university. Born in Burlington, Washington, in 2008, Dubs is actually an Alaskan malamute.

Harry the Husky is the costumed mascot who has become a fan favorite since his debut in 1995. The UW football program continues to grow, and its fan base has never been stronger. “My first game was a pretty amazing experience, the stadium and atmosphere really took my breath away,” says Robbie Williamson, class of 2018. While Seattle is a truly eclectic city, on UW game days, there’s nothing better that sporting the purple and gold and feeling the city’s love for UW.