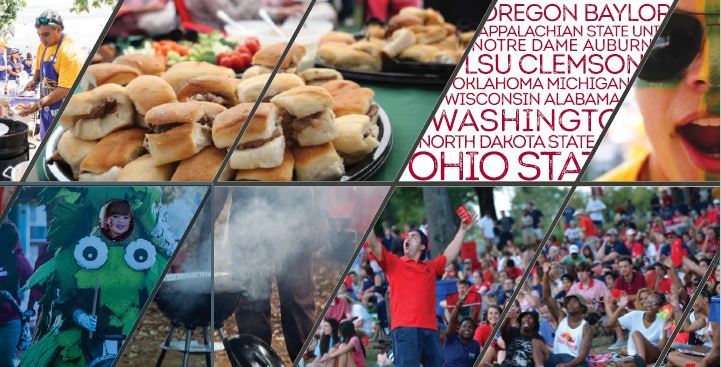 Regular readers of our annual top colleges for tailgating will notice a change to the structure of this year’s list. We know tailgating and the entire college football experience is about YOU, the fans. Those of you who get up at the crack of dawn, RVs packed to the rafters with grills, smokers, cases of adult beverages and enough food to feed a sizeable mercenary army, know better than anyone which schools have the best tailgating, traditions, atmosphere and scenery.  That’s why we let YOU pick the winners. 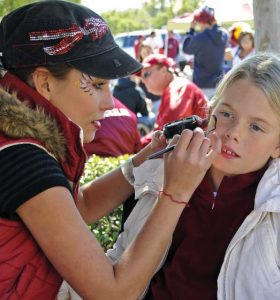 The last national champions of the BCS era slide back into our Top 25 in the same fashion as they won that title: without a moment to spare. Florida State’s place among college football’s elite has barely wavered since the 80s due in large part to an astonishing home field advantage. Seminole fans that flock to Tallahassee are likely to see a win as FSU boasts a record of 151-­23-­1 since 1988. That’s only 23 losses in 28 seasons!

FSU is already a tailgate titan in the ACC, but that didn’t keep them from stepping their game up another notch in 2016. Doak Campbell Stadium got a facelift with a brand new sound system, video boards and wrap around ribbon boards. Also, expect to see concourse additions, a brand new Champions Club with indoor/outdoor seating and the university even pressure washed and re­sealed the entire bowl. Not to mention a new paint job.

Assistant Athletics and Marketing Director Jason Dennard says Florida State hopes to improve the fan experience this fall in other ways as well. “We plan on enhancing the amenities and entertainment this fall. Weekend concerts and additional tailgating options will give our fans even more to look forward to.” FSU will also feature the Seminole Pregame, a new venture right outside of the stadium providing students and fans an all­-inclusive pregame tailgate.

For the best spots to tailgate on campus, check out Lot 14, recommended as the top spot in the shadow of Doak Campbell that provides the feel of a park in the middle of all the action on Saturdays. Then, for a less crowded option, Collegetown has several bars and restaurants that fans tailgate regularly before the Noles kick off. With Florida State bringing the heat this fall, our list is off to quite a start! 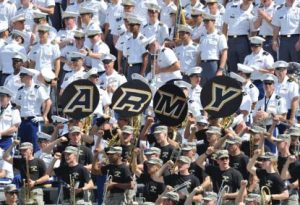 The annual gridiron matchup between the United States Military Academy and the United States Naval Academy is more than a rivalry: It’s a celebration of brotherhood. “It’s inevitable that every Army/Navy game turns into both a class reunion, a reunion of people you’ve served with and alumni networking,” says USNA alumnus Lieutenant Commander Jason Knox.

Tradition abounds at this game, which celebrates the teams’ 117th meeting on Dec. 10. And it begins long before kickoff. Army graduate Matthew Hamilton recalls “counting the days” as a first-year student. At any moment, an upperclassman can ask a freshman, or “plebe,” to count off the days until significant events. This classic matchup is always on the list.

Students may not spend much time tailgating, but they participate in the hoopla that surrounds those gatherings. The afternoon begins with “march on,” in which students from both schools march onto the football field and then into the stands. During the game, plebes mark each point scored with pushups. Come game’s end, each team sings its alma mater, with the losing squad going first. (For the past 14 years, that’s been Army.)

“Those are the emotional bookends. You do march on and everybody’s happy,” Hamilton says. “Three hours later, the singing of the alma maters, one of the teams is crushed.” And, he notes, they’re already counting the days until the next game. 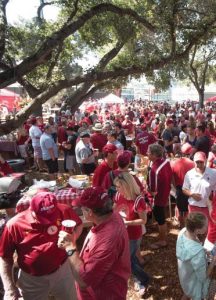 Despite being one of the newer schools to break into the Top 25, Stanford’s football program is steeped in history and tradition. The university’s football program dates back to 1892, and the first years of organized football were more than kind to the Indians—Stanford changed its nickname to the Cardinals in 1972—defeating Michigan 49-0 in the inaugural Rose Bowl in 1902. Stanford even claims two national championships, 1926 and 1940.  Of course, the intervening decades weren’t so kind to Stanford on the field, but the last few years have seen a resurgence for the top-ranked academic institution in big time college football. All of a sudden, Stanford football matters, and Saturdays in northern California are, as the kids say, a thing.

Being set in one of the most breathtakingly beautiful corners of the country doesn’t hurt, but there are other reasons Stanford is worthy of respect. The annual rivalry with Cal—the oldest rivalry in the Western U.S.; the Stanford Axe presented to the winner; one of the premiere stadiums in the PAC 12; and, of course, the Leland Stanford Junior University Marching Band, LSJUMB for short are a few others. Stanford’s marching band lives for controversy. Over the years, the marching band has been banned from Disney World, lampooned the kidnapping of Cal student Patty Hearst, driven a white Ford Bronco with bloody handprints onto the field at USC during the O.J. Simpson trial and wheeled the Stanford Tree mascot onto the field in a wheelchair in the wake of a UCLA football handicap parking scandal. That’s worth the price of admission!

NO. 22 University of South Carolina 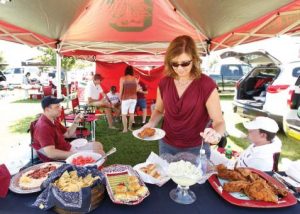 The Gamecocks crash the party as usual here at No. 22, and their inclusion was an easy one. In good times and bad, the South Carolina faithful have stayed true to their football program and have sold out just about every home game since joining the Southeastern Conference. Steve Spurrier left a legacy to be proud of in Columbia and left a legion of fans to new head coach, Will Muschamp.

Muschamp inherits a rabid fan base that doesn’t play games inside or outside of Williams­-Brice Stadium­­ even on game day. South Carolina features one of the most unique tailgate sites in the SEC with the Cockaboose Railroad. These abandoned tricked out railroad cars feature 22 customizable train cars with all the bare essentials. A full kitchen, multiple TVs, furniture and even a rooftop deck characterize each car and put many a tailgate to shame.

South Carolina is actually the only SEC member with an off­-campus stadium, but Senior Associate Athletics Director, Charles Bloom, sees that as an opportunity. “One of the positives of having Williams-­Brice Stadium off­-campus is the ample parking space including Gamecock Park directly across from the stadium,” says Bloom. “They feature a quality tailgating experience with water and power hookups in many of the spaces.”

South Carolina is also in a constant process of upgrading their athletics buildings and tailgating areas. Whether it’s the new indoor and outdoor football practice facilities or added grassy areas around the stadium, South Carolina looks to improve every year. A special treat for Gamecock fans will be the unveiling of a statue of George Rogers, South Carolina’s only Heisman Trophy winner.

NO. 21 University of Southern California 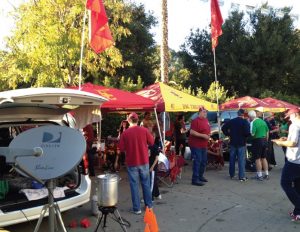 courtesy of University of Southern California

The sun is as bright as the stars at the University of Southern California—and at this Los Angeles campus, the stars are often of the celebrity variety.  That makes for an atmosphere with a little something extra that you aren’t likely to find on other campuses, sure. But USC tailgating is as focused on the family as it is on star power. Last year the university took its previously pilot tested Trojan Family Game Day Experience full throttle. The tailgating area offers parents an opportunity to purchase and enjoy treats while their children focus on spirited arts and crafts. Of course, alumni and students continue to tailgate along the pedestrian Trousdale Parkway, where they’ll pause to kick a flag pole on the way to secure seats in the Coliseum. (What’s a major sports program without a superstition or two?) When the fans head into the stadium, it will likely be in a processional led by the Trojan Marching Band after it salutes to fans outside Heritage Hall and boosters at Associates Park.

And when it’s time to proclaim victory, don’t look for Trojans fans to lift a single finger to indicate where they belong in the polls. Legends indicate Trojans cut off a captive’s index and middle finger and would taunt them by holding up those fingers. Whether true or not, USC fans lift those fingers to signal V for victory.