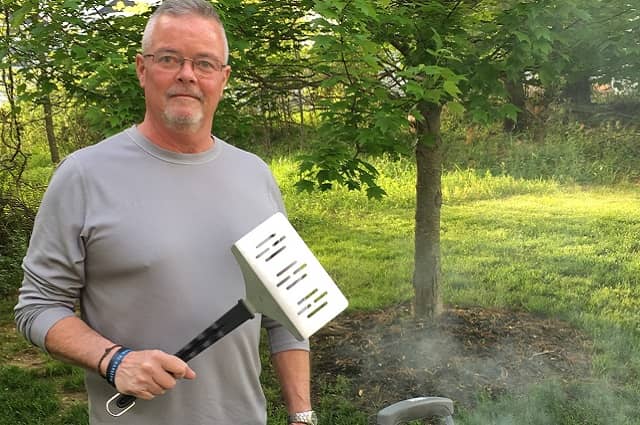 Mike Purvis lives quietly tucked away in Maryland. Retired from the Air Force after 30 years of serving tours from Europe to the Far East, he spends evenings grilling like a fiend with his treasured cast-iron skillet. He says his passion for grilling ignited in the early 90s while on assignment to San Antonio, and he had Texas barbecue. “I got bit right there,” he explains, and he started throwing brisket instead of burgers on his grill. “Now there’s nothing that I won’t grill.”

What about grilling “bit” you?

I think it was the visit to The Salt Lick outside of Austin. It was so good—the flavor. And the grilling part of low-and-slow was therapeutic for me. It was quiet and comforting. The focus, the aroma, the smell of the smoke. The longer the cook, the longer the therapy session.

And the creative ideas?

I’ve always been in tune with the Food Channel and stuff like that. I see things I’d like to try on Instagram and Twitter, and I make that my own. I don’t cook from recipes generally. I see a picture or I eat something and try to recreate from that.

I keep them in my head. I don’t write anything down. If I cook something that I like, I’ve got it captured in a picture. Even though I delete all my pictures when my phone gets full, I can scroll back in Twitter or Instagram and say, ‘That was good. Maybe we should do that again.’

I cook by instinct, sight, smell, touch. A lot of people would call me wrong, because I don’t even use a thermometer, but I’ve gotten it right. And I have had a good run following my instincts.

How successful are your “instinctual” recipes?

Very. I have a very low failure rate when it comes to food. It’s simple food, though. Simple ingredients, nothing fancy. If it gets overly fancy, I’m probably exceeding my bounds.

1. Anything you cook in a skillet on a stove can be cooked in a cast-iron skillet on the grill.

2. Don’t use soap to clean cast iron. It strips the seasoning. Use hot water and a plastic scraper to get any bits off.

3. Use it to sear meat, including steak. Cast iron heats evenly so it provides an all-over, even crust you can’t get on the grates.

4. It makes adding the smoky flavor of the grill to anything possible, including cobbler and meatballs in a sauce.

5. No need to add oil when cooking, even when sautéing or searing.

6. Season the skillet after every cook. Drizzle a little olive oil in the bottom of the clean skillet and wipe it around the inside with a paper towel.

What’s “overly fancy” to you?

Sauces, for example. I’m not shy about buying sauces off the shelf. Except that blackberry (recipe below) one for the lamb. For that one, I got a lot of lamb in the mail from winning a contest online. And the area right by our house has blackberries, so I looked up a sauce—it might have been something I saw on TV—and created a reduction, and it went extremely well with the lamb.

Do you low-and-slow the usual stuff?

May sound strange, but I do low-and-slow for anything. I can low-and-slow a burger. If I need to, I’ll sear it on the heat at the end—a reverse sear. I reverse sear a lot of things on the kettle, whether that’s wings, a rack of pork…It all starts indirect, and I finish it off on the hot side.

You get a consistent cook on the inside doing it low-and-slow, and you get a nice finish on the outside with the final sear in the cast iron skillet. People say you lock in the juices if you sear off first, but I think you get an uneven cook. That’s just my experience.

You grill with a cast-iron skillet?

I am in love with my cast-iron skillet. I like it because of the even heat, and you can pretty much grill anything in a cast iron that you can do right on the grill. You can do a nice steak on a cast iron. The other night, I sautéed pancetta in the cast iron on the grill and threw in shrimp, then tossed that over linguini lying on a bed of baby spinach. You can do that inside too, but on the grill, you get the added smokiness. I wouldn’t give up my cast iron.

for the reduction sauce:

Allow the lamb to stand at room temperature for 30 minutes prior to the cook. Season the lamb generously with salt and pepper.

When the smoke is clean, add the lamb to the grill opposite to the fire side (indirect). Close the lid and cook 2–3 hours for medium-rare (internal temperature 130–135°F), or to desired doneness.

Remove the lamb from the grill. Tent lightly with foil and let rest for 15 minutes.

Add 1  1/2 cups blackberries and remaining sauce ingredients to a saucepan. Bring to a simmer over medium heat, stirring occasionally, but do not boil. Use a potato masher to gently mash the blackberries as they soften.

After 20 minutes, add the remaining blackberries and continue to simmer until the sauce has reduced by half. The reduction should coat the back of a metal spoon.

Spoon the reduction sauce over the lamb, and garnish with fresh rosemary sprigs.

How many grills/smokers do you own?

I own one kettle, and you can guess the name. I’ve probably been cooking with the Weber since I can remember. We do have another grill in the corner of the patio—the Weber gas—that we probably haven’t fired up for over a year. It’s a plant hanger.

My neighbor asked me if there was anything that couldn’t be cooked on the grill. I said, ‘Challenge me,’ and he said, ‘Jell-O.’ I cooked the water for the gelatin on the grill and stirred in some jalapeno slices, and then I set it to gel. It was lime Jell-O—I was going with a Tex-Mex theme. Turned out with a very bitter, smoky flavor. Needless to say, it was terrible. So my attempt to cook Jell-O on the grill was a fail.

Besides beef, it’s chicken legs and wings. They’re easy to eat, good for entertaining, and good for watching sports on TV.