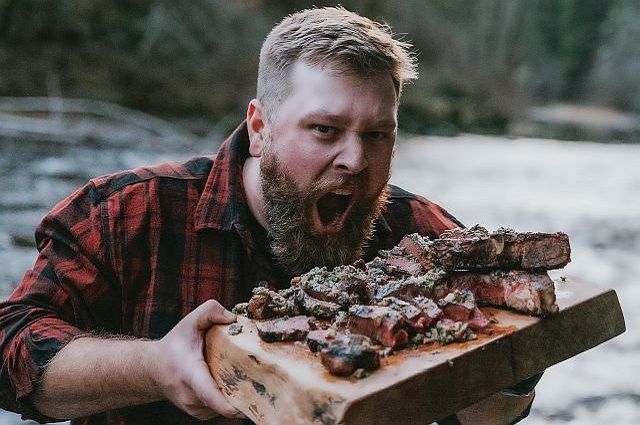 Derek Wolf’s mind swims in curiosity. He wants to try things. Especially over fire. It’s what lured him away from a corporate career in Nashville to build his own cooking brand—purely by accident—that’s been in play and growing for four years now.

“I’m on a journey to bring fire, food and people together through simple and approachable recipes,” he says about Over the Fire Cooking.

And he doesn’t have any rules about the tools or the kind of fire, though gas is kind of tame. “I’ve not got any issue with gas or pellets,” he says, but his thrill lies in live flame fueled by wood, like fire pits, hardwood charcoal grills, and campfires.

Which brings us to Wolf’s unconventional grilling endeavors based on methods he’s seen others do and wanted to try, tweak or take completely out of the box. “After a while it becomes an addiction to see how far I can push it,” he says.

What’s a challenging way to cook over an open fire?

Hanging. I’m still learning how to master it. Hanging is basically open-pit smoking. It’s a little bit more direct heat than smokers, but the idea is low-and-slow again. It takes 8 to 10 hours for one chicken. I think I hang it usually 2½ to 3 feet from the flames.

That’s a long time for a chicken.

But it created the best chicken I’ve ever had. You get a really caramelized kind of crust, and it gets a nice subtle smoke flavor. Because it’s so low heat, you end up making it really juicy.

An alternative to cooking low-and-slow for brisket or beef ribs, the hot-and-fast method cooks at a higher 325°F for 4½ to 5 hours, instead of 12 to 18 hours at 225°F. Here’s what Derek says makes his hot-and-fast brisket epic. The recipe is at overthefirecooking.com.

What about reverse marinating?

It’s not as complicated as it sounds. You’re trying to get more flavor inside of the food, similar to injecting, but it’s done post-cooking. So what you end up doing is grilling your food, then you quickly throw it into the marinade—this is like 10 minutes—and because the muscle fibers open when it cooks, the juice and marinade penetrate deeper into the food. Then you pull it back out and sear it to get it charred and warm again, and you’re ready to go.

The downside is the crust. I love a good crust. And the last thing you want is to get moisture on it. But the way to do both is go low and slow and marinade during its rest carryover time. Before you’ve developed a crust. Then pull it out of the marinade and sear it super hot to get the crust. That’s been my method of late.

Do you ever grill right on the coals?

All the time. The flavor is absolutely the same as anything that you grill, but it’s a fun way of having control over fire. Dwight Eisenhower talked about cooking on the coals during World War II.

Make sure the coals are white hot, but not ashy—right as they’re breaking down and glowing. The other thing is to pick steaks that don’t have massive chunks of fat. You want to avoid flare-ups and big char, so I don’t usually use rib eyes. I end up using a lot of skirt cuts and New York strips—something you can do in two minutes per side and be done.

Lather the lamb shanks in oil, then season with mustard, sea salt and black pepper. Place in the fridge and let sit for 1 hour.

Using charcoal and pit wood (Derek prefers Cowboy brand), create a medium-high temperature fire. Set up your Dutch oven over the flames and preheat it until nice and hot.

Add butter to the Dutch oven and let melt. Add the seasoned lamb shanks and sear the outside thoroughly, about 2–3 minutes. Set aside.

Simmer over a medium-high fire until the meat almost falls off the bone, 2½–3 hours.

Move the shanks to a serving dish and top with the braising juice. Garnish with chopped parsley and enjoy.

What’s with cooking on a shovel?

It’s a cheeky, funny way of cooking. The shovel basically acts like a cast iron skillet, so you’re able to sear your steaks, cook catfish or lobster tails. It makes people laugh.

You make it a show?

I never tell people I’m cooking on a shovel. I just pull it out and throw it on the fire. Then I take the rib eyes and throw them right onto the shovel, and people freak out. The tricky part is trying to flip your steak—you could lose your rib eye. But a little charcoal and ash never hurt nobody. Make sure it’s not a galvanized or matte black shovel. Get one that’s food-grade 304 stainless steel.

Can you broil in a fire?

Sure. I take my cast iron and cover it in tin foil and just put white hot coals right on top. It will caramelize everything. The other way is to put your cast iron in the fire pit and put a grate over the top of the skillet and put smoldering logs or charcoal on top of the grate. I use it to cook eggs, melt cheese for nachos, or quickly grill the top of salmon without having to flip it.

What’s the draw for you of open-fire cooking?

The thrill I get is that I know I can’t really control fire. It’s different every time. I just get the fun opportunity of riding the wave and getting good at reading and understanding it. In a world right now that feels uncontrollable while our whole lives are feeling controlled, it’s a fun way to let loose and know that there’s a lot of things I can’t control—and that’s OK.