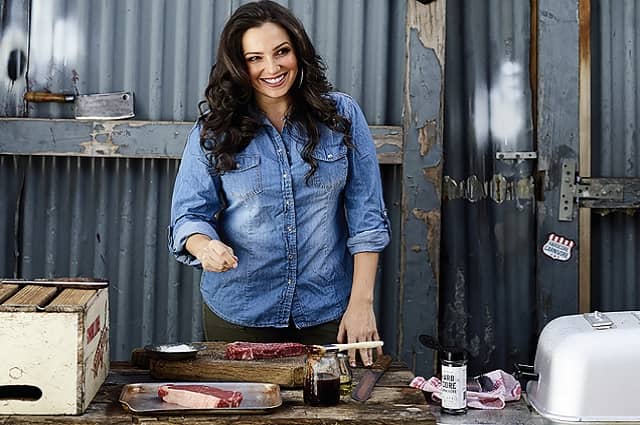 “Barbecue brought me over here,” says Aussie-born Jess Pryles. “I visited Texas about 13 years ago and had my first taste of barbecue. And as I fell in love with Texas, so too it was with barbecue. That was the kicking off point for all this.” All this is now a well-earned expertise and renown in prepping and cooking all things meat.

Why delve so deep into learning about meat?

As a lay person, to try and figure out how barbecue was made and why brisket wasn’t the same as in Australia, I had to understand butchery and beef and meat quality. I was empowered by everything I was learning. Now I share all that.

So what’s something most people don’t know?

Venison shanks. You have to cook them low and slow, be that in a smoker or slow cooker or braising them on the stove. Just treat them as you would a brisket and cook them until the meat is completely broken down and tender. A lot of people just assume that most of the deer is only good for turning into ground meat, but if you can take the time to learn how each cut should be treated, you get an incredible taste payoff.

What about seasoning meat? Where do people go wrong?

A lot of people, when they create rubs, think they have to or want to create a flavor bomb in a shaker. They think it should be very ‘in your face.’ And the most common flavor that appeals to people is sweet—as evidenced by judges in barbecue competitions—but that doesn’t mean it’s the most nuanced. Rather than having some overpowering, in-your-face seasoning with lots of sugars and smoke flavors, what I try to do in my rubs is bring out the best flavor the meat can be.

And there’s rules to salting?

There’s a relationship of salt to meat. There is a window when you should apply the seasoning, because salt withdraws moisture from meat if you don’t season immediately before cooking—five minutes or less before cooking—or leave it on for at least 45 minutes, so the brine can reabsorb back into the meat. I talk about that in my cook book.

1 Flat iron steak. Second most tender cut on the whole steer, but four times less expensive than the tenderloin.

2 Beef cheek. It cooks up like a mini brisket. It’s rippled with collagen that converts to gelatin during cooking. That’s the science part that makes it so soft and delicious.

3 Pork neck. Basically attached to the Boston butt but a much smaller piece, if you’re wanting something a little faster to cook.

4 Lamb ribs. Sometimes sold as lamb belly, brisket and a variety of other names, depending on what your butcher calls it. Harbors a beautiful amount of fat that keeps them moist during cooking.

5 Venison shanks. As someone who enjoys processing my own animals, I think shanks are overlooked. I like to smoke, then braise them, and they end up being the most flavorful cut on the animal. If they’re cooked right, they can be so much more than just ground venison or sausage.

A grilling cook book that covers salt and meat science?

It’s called Hardcore Carnivore. In today’s environment where people are propelled to grilling stardom through the internet, very few people are bothering to learn the craft of barbecuing. But cooking is chemistry. Understanding basic concepts of salt and meat, and heat and meat, and why grading matters—understanding these sort of principles makes you an infinitely better meat cook.

You talk about cuts of meat in your book. Got a favorite?

I don’t necessarily have one cut, but I have a bias toward beef. In order of preference—beef, lamb, venison. Pork and chicken are about equal. There’s something umami about beef. Something more primal.

What about a favorite barbecue tool?

There’s essentials, and what I call luxury barbecue tools—they make it so much nicer to have around. But my favorite would be my steak carving fork. I was given one in Brazil as gift. It’s this four-pronged, really wide fork. It looks like pulled-pork claws, but it’s not at all. It’s very, very rigid and very, very strong. You know how the traditional roast fork is pointy and real narrow compared to the size of a roast? It makes sense to have the tines more spread out over the surface area.

Did you come up with the chimney method for searing?

I don’t believe that I was the first to come up with it. The biggest mistake people make is they don’t get their coals or surface hot enough to get that sear. So instead of using the chimney to light the coals, you light the coals and put the grate right over the top of the chimney, creating a vortex of flame. You need that for a good sear. You really want to use it to reverse sear, though—you come in and finish it with that really hot sear.

Put the chicken wings in a large, resealable plastic bag and season well with salt.

In a bowl, mix together the jelly and peanut butter. Add the sriracha, Worcestershire sauce, brown sugar and paprika, and mix thoroughly. Pour the marinade into the bag, and massage the bag gently to distribute the marinade over all the chicken wings. Place the bag in the fridge to marinate for at least 2 hours, or preferably overnight.

Heat a grill to medium. Place the wings on the grill and cook, turning them every 2–3 minutes. This should allow the color to develop without burning before the chicken is cooked all the way through. Continue to turn the wings until they are nicely browned with charred areas.

Place on a tray to cool slightly. Sprinkle with chopped peanuts for a textural garnish.

Know your cuts: It’s better to use wings that have been jointed into wingettes and drumettes. A whole, three-joint wing will take longer to cook, and the delicate wing tips burn very easily.

Do you own a whole load of grills?

In major rotation, there’s about five. I’ve probably had about 13 over the years, but I pared it down rather than having rain collectors in my yard.

What’s the most irritating thing you see amateur grillers do?

Walking before they learn to crawl. They think that they have learned because they’ve seen so many YouTube videos and Instagram accounts. All that theory without any practice, and they overthink it, over inject it, over smoke it, complicate it, because they’re trying to figure out the magic formula instead of just getting practice in cooking. No amount of homework will ever take the place of trial and error and experience.