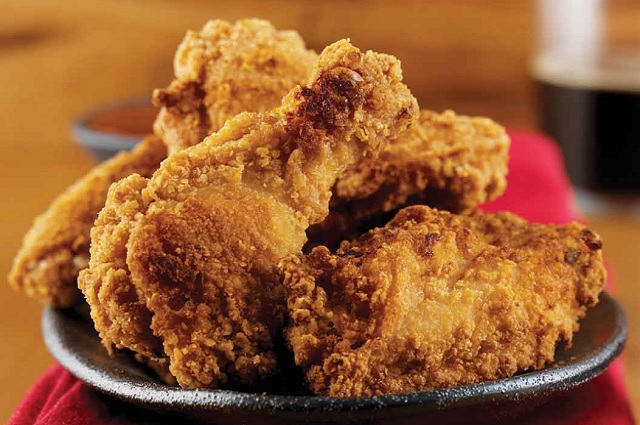 "This perfect tailgate recipe will render a tender fried chicken that is spicy, full of flavor and is extra crispy."

For the Spicy CHA! By Texas Pete® Barbecue Sauce

2 quarts frying oil, if you are pan frying chicken

1 gallon frying oil, if you are deep frying chicken

Marinate the chicken with the CHA! By Texas Pete® for 24 hours in the refrigerator.

Mix the flour, salt and black pepper together until fully incorporated, and divide this flour mixture between two 1-gallon ziplock bags.

After 24 hours, remove the chicken from the marinade, but do not scrape any of the marinade off the chicken, and then divide all the chicken evenly between both bags of seasoned flour. Shake vigorously for 1 to 2 minutes to coat all of the chicken completely.

Preheat the deep fryer to 325°F, or, if pan frying, make sure you pour enough oil into the skillet so the chicken is covered at least half of the way up, about 1 1/2 to 2 cups of oil, depending on the skillet size. If you are pan frying the chicken, turn the heat to medium and try to keep the temperature around 325°F. You may have to adjust the temperature several times during the cooking process.

When the chicken is finished, place on paper towels to absorb excess grease, and season chicken with salt and pepper. Be sure chicken is cooked to an internal temperature of 165°F.

Serve with the Spicy CHA! By Texas Pete® Barbecue Sauce.