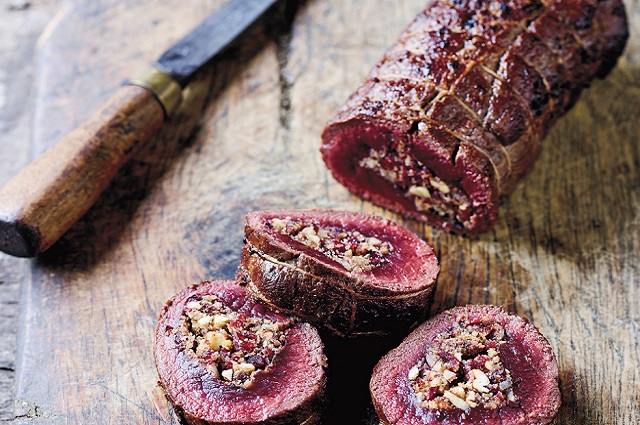 "Some folks call it loin, others call it backstrap – whatever you call it, don’t cut it up into steaks! Whole stuffed venison backstrap is an easy, delicious recipe! "Chiffonade" is just a fancy way of referring to very thinly slicing a herb - you can also just finely chop the sage leaves."

½ teaspoon salt, plus extra for seasoning

In a saucepan over medium heat, add 1 tablespoon of the oil and cook the mushrooms, shallots and sage leaves until softened. Allow the mixture to cool, and drain off any excess liquid the mushrooms released during cooking.

Toast the walnuts in a frying pan without any oil, stirring regularly to avoid burning, until fragrant. Chop and add to the mushroom mix.

Add salt, pepper, allspice and breadcrumbs. Stir to combine. Add the melted butter and stir once more until everything is well mixed.

Butterfly the backstrap so it’s flat and even, and spread the stuffing mixture in a log across the middle. Pull the backstrap back together, forming a cylinder around the stuffing, and secure with twine. Season the outside well with salt.

In a cast-iron skillet (or heavy based pan), heat the remaining oil until nearly smoking, then sear the stuffed loin about 2 minutes per side until completely browned all over. Place the skillet in the oven, and cook a further 4 to 6 minutes. It’s important to not overcook the backstrap, as it will become tough.

Remove from the skillet, and rest under foil for 8 to 10 minutes before slicing 1-inch thick portions and serving.