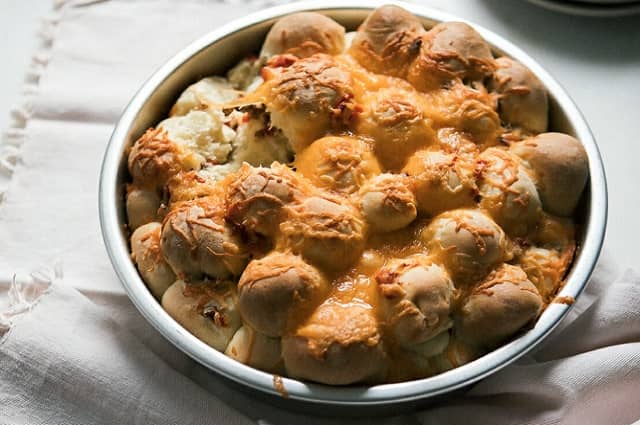 Recipe and image courtesy of Adrianna Arame, A Cozy Kitchen and AmericanPecan.com

"Spicy, flavorful pimentos amid melted cheddar and sweet pecans makes for a warm, comforting appetizer and game-day starter. To save time, use store-bought dough instead of homemade."

To a small bowl or measuring cup, combine the milk and instant yeast. Allow to stand for 5 to 7 minutes, until foamy.

To the bowl of a stand-up mixer, with the hook attachment, add the yeast/milk mixture, melted butter, eggs, salt, and flour. Turn the mixer on medium speed and knead for 5 to 8 minutes, until the dough has formed a smooth ball.

Rub the inside of a clean bowl with olive oil or coat with cooking spray and transfer the dough to the bowl. Grease the top of the ball of dough and cover the bowl with a clean kitchen towel. Allow the dough to rise in a warm place for about an hour or until doubled in size.

Spray or oil a 9-inch round cake pan or baking dish. Liberally flour the work surface and roll the dough into a 12×12-inch square that’s about 1/2-inch thick. Cut that into 36 squares. Roll the squares into balls.