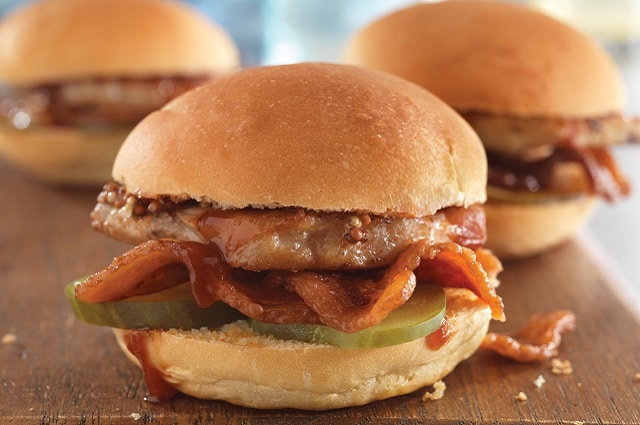 Recipe and photo courtesy of National Pork Board, PorkBeInspired.com

Slice buns in half horizontally. If desired, toast or warm through. Spread cut sides of buns with butter.

In a large skillet, cook bacon over medium heat for 1 minute or until there is enough bacon fat released to coat the bottom of the pan, stirring occasionally. Push bacon to side of the skillet, and add the chops. Sprinkle chops with salt and pepper. Cook chops for 3 to 10 minutes or until lightly browned and internal temperature on a thermometer reads between 145°F (medium rare) and 160°F (medium), turning once halfway through. Remove chops and bacon, draining bacon on paper towels and resting chops for a minimum of 3 minutes.

For cocktail buns, cut each chop in half so you have eight pieces. Place chops in buns. Top chops with steak sauce and bacon strips. These bacon-infused sandwiches are ideal for tailgating and cocktail parties.

Italian: Before cooking, dip chops in two large eggs and then in seasoned fine dry bread crumbs to cover (approximately 3 tablespoons of bread crumbs per chop). Cook as directed, except sprinkle on 1 to 1 1/2 tablespoons of shredded Parmesan or Provolone on each chop after turning the chops. Omit the butter and steak sauce. Spread buns with 1/2 tablespoon of prepared pesto; add pork and bacon, and then top with roasted red pepper slices and arugula.