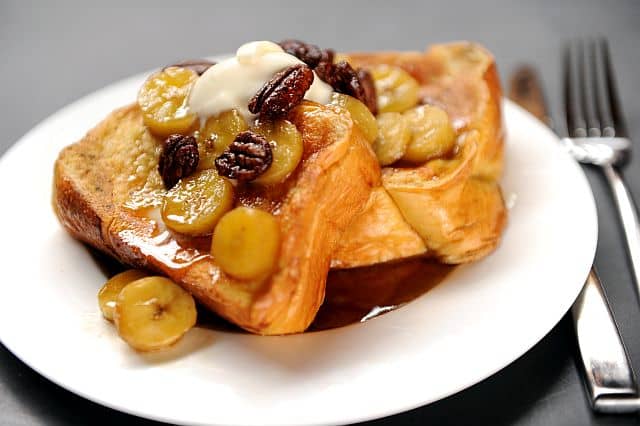 "Sure to lure any tailgater to help with early-morning setups, this warm, decadent breakfast dish simmers bananas in a glaze of brandy and maple syrup."

6 or so ounces crème fraiche

6 or so ounces caramelized pecans

Prepare the grill for using a griddle with indirect heat to 350 to 400°F. For the Kalamazoo K750 Hybrid Fire Grill, set the left and right Dragon Burners on medium, while the center burner remains off. Place the griddle over the center burner and preheat with the hood closed.

Combine the brandy and maple syrup in a large pan and simmer over a cooktop burner on low heat, stirring frequently, to thicken for about 20 to 30 minutes. Keep a close watch to avoid turning the mixture into caramel. After reducing the brandy, the thickness of the mixture should be similar to maple syrup. Stir in the butter until melted and combined. Add the bananas. Keep simmering over the lowest heat possible while you prepare the French toast.

Beat the eggs in a bowl along with the heavy cream, cinnamon and nutmeg. Dip each slice of bread into the bowl, then place them on sheet pan(s). Transfer slices on to the griddle and close the grill hood to allow the thick slices to both grill and bake. Check the bottoms after a few minutes to make sure the heat isn’t too intense. If they are cooking nicely, continue cooking for about 20 minutes, flipping each slice halfway through.

Serve by topping each slice with the brandied bananas, followed by a dollop of crème fraiche and a sprinkling of caramelized pecans.