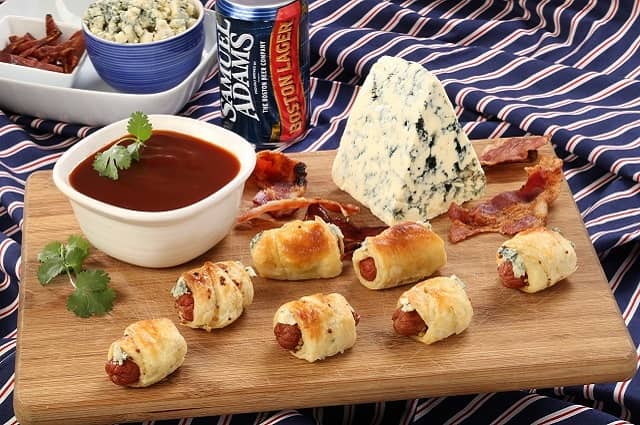 "Serve these tasty little puppies for a unique grilled appetizer at your next tailgate!"

Juice and zest of 1/2 lemon

Juice and zest of 1/2 orange

Salt and pepper, to taste

For the Bacon Blue Cheese Dogs: On a baking tray, cook the bacon at 375°F for about 12 minutes, until slightly brown but still pliable. Remove from oven, and allow to cool.

For the Samuel Adams Boston Lager BBQ Sauce: In a heavy-bottomed pot, toast all of the dry spices (cumin, coriander seed, celery seed, chili powder, paprika) over medium-low heat. Once the spices are toasted (you’ll begin to smell their aroma), add the honey and brown sugar, and cook until it begins to caramelize. Once the mixture begins to caramelize, add the red wine vinegar, ketchup, soy sauce, chili sauce, Samuel Adams Boston Lager, lemon juice and zest and orange juice and zest, and reduce until the mixture thickens. Season the mixture with salt, pepper and cilantro. Let it stand for two hours, and then strain through a fine-mesh, conical sieve. Place in a serving bowl, and serve room temperature to warm as a dipping sauce for the Bacon Blue Cheese Dogs.