The Amazing History and Origins of Jerky 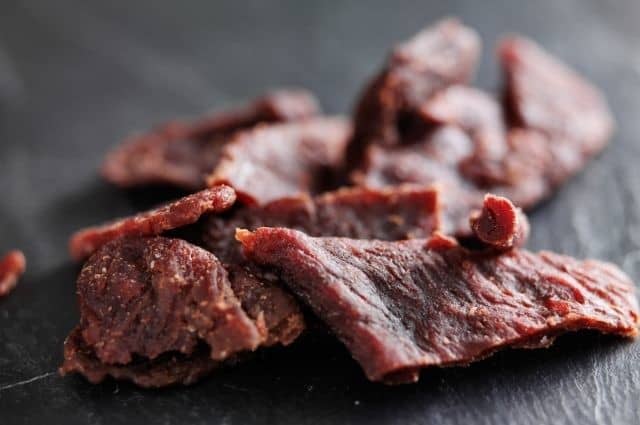 The Amazing History and Origins of Jerky

To follow the amazing history and origins of jerky, we must travel from ancient Egypt’s pyramids to the modern aisles of your convenience store.

Before modern refrigeration, dehydration was one of the most popular methods to stop food from spoiling. Though humans could have been drying meats for thousands of years before, the first evidence we have of dried meat consumption comes from ancient Egypt.

Burial site excavations of tombs from thousands of years ago revealed that some Egyptians were buried with dry meat. Current theories into the amazing history and origins of jerky suggest that the Egyptians created their proto-jerky by laying vast amounts of meat in salt to dehydrate.

The term jerky comes from “Ch’arki,” a word from the South American tribe the Quechua that means “dried meat.” The tribe had been making “Ch’arki” since about 1550, though other evidence suggests they could have been making it long before.

Similar to what we eat today, “Ch’arki” was pounded, deboned, and dried meat. The Quechua favored “Ch’arki” because they knew the highly nutritious meat would stay fresh on long journeys, which is, in many ways, the reason we still bring jerky to tailgates today. Their meat was probably made from alpaca and llama, which were native, domesticated animals of that region.

The story of how “Ch’arki” evolved into the jerky we eat today begins with Spain’s arrival in South America. Upon meeting the Quechua and trying their “Ch’arki,” Spanish explorers were impressed and decided to bring some with them as they traveled north, where they discovered other tribes had their own dried meat variations.

Meanwhile, the Spanish and other settlers learned how to make jerky themselves, turning the snack into a valuable trading item for European mercantilists and settlers. The first recorded use of the word “jerky” comes from John Smith’s 1612 Map of Virginia, in which he wrote, “as drie as their jerkie beefe in the West Indies.”

Over time, the Europeans added their own cultures and ideas to jerky, including new spices and flavors. Jerky became so widely eaten on the continent that exploratory groups would often bring a trained jerky maker with their party if they needed more dry foods to complete their travels.

Jerky in the Industrial Age

In 1901, the United States military created its first emergency ration for soldiers, which gave each man 3,000 calories of meat, bread, sugar, and coffee should they be cut from supply lines during battle. In 1918, the military added beef jerky, boosting its popularity.

Since that time, beef jerky has grown in popularity throughout America. Now a staple of Fourth of July celebrations and tailgates, jerky is also made from wild game, fish, and exotic animals.