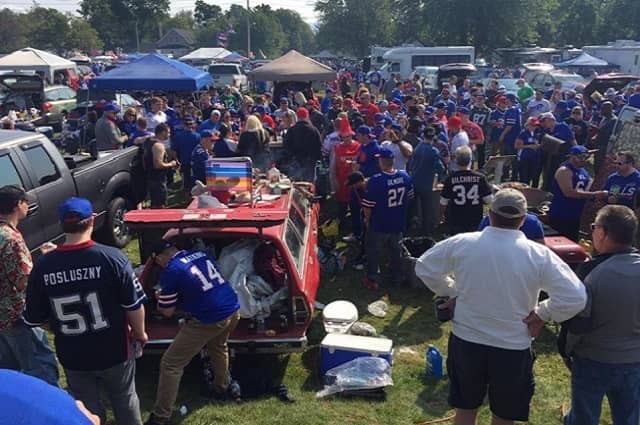 Tailgating is the best way to enjoy a game with like-minded fans. However, not all stadiums are equally as accommodating towards fans coming to cheer on their team. That’s why we’ve created this list of ten of the best NFL tailgating stadiums to visit.

As you hit the road to support your favorite team you get the chance to hang out among thousands of fanatics while enjoying some excellent food and drinks, all while betting on all the action from your phone.

Bills fans sure know how to throw a party – don’t be surprised if you see things getting broken or food fights breaking out if you tailgate in Buffalo! Unlike most NFL stadiums, Bills Stadium enjoys a more rural location. This means many of the fans have known each other for years, and tailgates have a more personal atmosphere.

The chicken wings are one thing you won’t want to miss out on during your visit to New York.  Since Buffalo wings were invented here, you can be sure they’re the best of the best.

Win or lose, Cleveland Browns fans still turn up in their thousands to show their support. Three years ago, after the Browns broke a long losing streak, tailgaters enjoyed some free beer, courtesy of Bud Light!

You’ll find some unique traditions at a FirstEnergy Stadium tailgate – it’s sure to be one you’ll remember for a while! Maybe you want to play it safe – try sampling the famous chicken cooked over a can of beer. Or, if you’re feeling brave, join the locals in a game of Thunderstruck. AC/DC’s Thunderstruck is played on a loop, with players taking a swig of their drink every time the title word is mentioned (which is a lot!).

Visiting the Mercedes Benz Superdome, home of the New Orleans Saints, is sure to be an unforgettable experience. With up to 80,000 fans gathering at once, the atmosphere is unbeatable.

Tailgates here are held in the enormous plaza, which is home to all kinds of entertainment and facilities for fans to enjoy. For example, you can find clubs, eateries, screens showing the latest sporting action, and even live concerts while you’re waiting for the big game to start.

A tailgate at Heinz Field, home of the Pittsburgh Steelers, always draws a large crowd – most of the city comes out to show their support! This can lead to the area becoming quite crowded, which might not be to everyone’s tastes, but it does help create an incredible atmosphere.

Steelers fans aren’t short on energy, so be prepared to witness some of the best team spirits you’ve ever experienced. You’ll find cookouts taking place throughout the day, and the alcohol is always flowing.

Home of the Green Bay Packers, Lambeau Field is one of the NFL’s most important landmarks, and it could even be where the term ‘tailgating’ originated.  Everyone is welcome to join in a tailgate at Lambeau Field, and there are loads of fun options. Perhaps the most favored is the Tundra Tailgate Zone.

Here, fans can watch the action on huge screens, even if they don’t have a ticket to get into the stadium. Of course, there’s also food and beer available, and you can even enjoy some live music before the game.

Chicago Bears’ Soldier Field is the perfect option for those looking for a more family-friendly tailgate experience. However, there are other lots you can tailgate in if you don’t have kids. Soldier Field is a great place to visit if you are looking for great food – you’ll find favorites, including donuts from Krispy Kreme and famous Chicago-style hotdogs.

While you’re in the area, don’t forget to explore the rest of the city, too. There is so much to see and do here, so you might want to stay for a few days.

If the cold weather doesn’t put you off and you’re looking for an unforgettable tailgating experience, a visit to New England Patriots’ Gillette Stadium is a must. Even during a blizzard, the party must go on!

If the weather is poor, you’ll find plenty of delicious food options to warm yourself up in no time. Fresh seafood is always popular, and the clam chowder is a particular fan favorite. If you’re lucky, you might even be offered a bite to eat from legendary superfan Billy Burrows, who sets up his grill at every game.

Houston Texans’ NRG Stadium is the place to go if you are looking for the best food at a tailgate! Of course, it’s all about barbecue here, with smokers blazing and huge joints of beef sizzling away.

The party doesn’t stop after the game here, either. Win or lose, you can expect the tailgate to carry on long after the game is over, so this is the stadium to visit if you’re a bit of a party animal! The atmosphere at NRG Stadium on a game day is one of the best you’ll find.

Last but not least, we have the Hard Rock Stadium, home to the Miami Dolphins. If you’re looking for some of the friendliest, most welcoming fans, this is where you’ll find them. The food is also pretty good – with Cuban dishes featuring prominently on the menu.

If you are looking for a more relaxed, less crowded tailgate experience, the Hard Rock Stadium could be the perfect location.