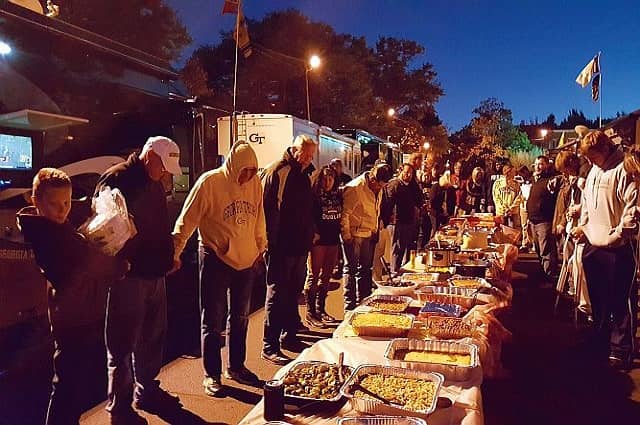 Thanksgiving weekend. A long-entrenched ritual of gorging on food Thursday, shopping on Black Friday and, on Saturday, beating the tar out of your nearby college football rival. At Georgia Tech, that gridiron friction flows toward the Georgia Bulldogs, and has since 1893. After a one-year COVID-forced hiatus, the series resumes this year as the teams battle at Bobby Dodd stadium on the Georgia Tech campus, November 27 for a Thanksgiving football weekend.

“Last year (2020) was a weird season,” says Kimberly Decarrera, who’s been a relentless RV tailgater for the Yellow Jackets since she was a freshman 21 years ago—except for those few years stepping out with regular car tailgaters.

Last year the tailgate parties at Georgia Tech were nixed because of the coronavirus. “It was hard to put into words just how disconnected I felt because we weren’t able to go RV tailgating,” she says. “I’ve enjoyed going to the games, even with the team rebuilding under a new coach. But I don’t feel invested in the season like I do when we are tailgating. It was all kind of meh.” But Decarra’s recollections of those special Thanksgiving tailgates remain vivid, and she hopes to add to the memory bank this season.

The RVs, it turns out, with their 20 fully equipped kitchens a few steps from the serving tables, form the foundation of a traditional Thanksgiving banquet unattainable by most tailgates. Fussy, succulent dishes can be prepped on-site minutes before serving. “I can do brussels sprouts with bacon right there on the stovetop, so it comes off freshly cooked and served right away,” touts Decarrera.

Everyone who attends—anywhere between 50 to 120 people—brings something. “That’s the cost of admission,” laughs Decarrera. The magnificent spread runs 40-feet long atop banquet tables set between one of the two rows of RVs parked with their canopy sides facing each other. Like a two-street, mobile neighborhood.

The feast resembles something out of a Thanksgiving glutton’s dream. A few smoked, deep-fried or oven-roasted turkeys, a honey-baked ham, and “one of the guys makes some of the most excellent brisket. I would put that up against anyone in Texas,” Decarrera boldly states. Only the Grinch’s Roast Beast is absent.

Every year, the celebration kicks off with heads bowed and hands clasped as the tailgaters surround the food-laden tables, while an elder of the RVers gives thanks. “This is a great tradition for us,” Decarrera says. “We consider ourselves a tailgate family, and this brings a sense of togetherness.”

What comes after such a fierce feast? Karaoke? Corn hole? Dance contests? Normally, yes. But not at Thanksgiving. “We’re all in food comas by the end,” Decarrera says with a smile in her voice. “You don’t have a lot left over for shenanigans after that.”   Except watch the game of course.