It’s hard to beat the enthusiasm and devotion of a sports fan. Or the creative outlets they invent to show their love for the sport or their team. Money is no object. Shame rarely enters into the equation. And sometimes what appears to be insanity, ends up becoming so entrenched that stores stock the illogical, but needed, product alongside that team’s section of attire and gear.

That’s what happened with the Buffalo Bills. A group of crazy, passionate tailgaters has been body-slamming folding tables for several seasons now. They jump from the top of vans, throw each other, and even set the tabletop alight before slamming into the plastic tables in hopes of breaking it in two. Some

Dick’s Sporting Goods stores in upstate New York, tuned into the needs of their radical fans and, this January, among the usual placid racks of red-and-blue jerseys, hoodies and hats, stood incongruous, dozen-high stacks of plain white plastic tables.

Other times, fans just get inventive. Especially when budgets are meager, like with college students. On a popular Ute forum, gUrthBooks described playtime in the University of Utah stadium seats utilizing, of all things, a pizza box lid. “Throwing the torn-off pizza box cover like frisbees during the game was next level fun. I remember one game, it looked like 10–20 pizza box covers were in the air at any one time. Absolute Bedlam!”

You Called Him What?

Admiration can run deep with fans. So deep that some thrust their idols’ names onto their kids. Like with Giannis Antetokounmpo, the all-star forward with the Milwaukee Bucks. In 2015, five newborns in the U.S. were named Giannis, according to the U.S Social Security Administration. The next year, the unique moniker shot up by 662% when Antetokounmpo was a shoo-in for his first all-star game. By 2019, “Giannis” had increased another 135%. At least those kids weren’t saddled with Antetokounmpo.

However, by that year, there were at least three kids sporting “ESPN” as their lifelong identifier. Can you imagine roll call at the start of every school year for that kid? Or job interviews? Do they have siblings named ESPNHD and ESPN2? Fortunately, those kids don’t have to go through life called by a row of letters, though. It’s pronounced Espen. But absolutely no one will get that on the first try.

Sometimes it’s defeat that spurs the outlash of inane behavior in fans. After the University of Michigan lost because of a fumbled snap on the final play of the game to their historic rival Michigan State in 2015, frustrated students had some expected fights and, unexpectedly, lit a couch or two on fire.

The odd choice of couch as fuel isn’t as unusual as you’d think. In 2011, 40 students were expelled or suspended for burning couches at West Virginia University, where setting fires as part of a celebratory tradition started as far back as the 70s. But those were bonfires set along University Avenue. Around 2012, the tradition hit riot level with fires being set to anything from cars to light posts at one point. The choice of fuel may be baffling, but the passion behind it resonates with all of us rabid fans. 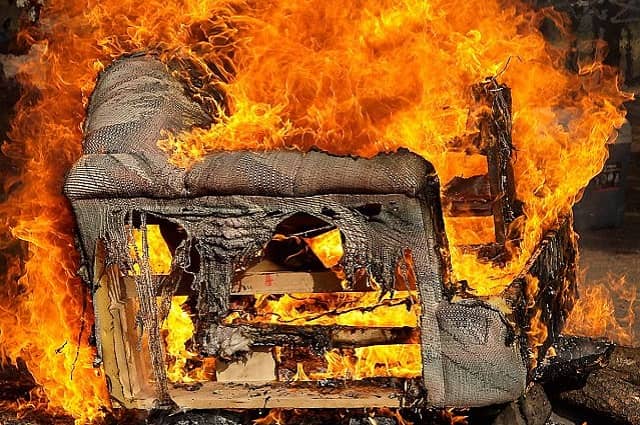