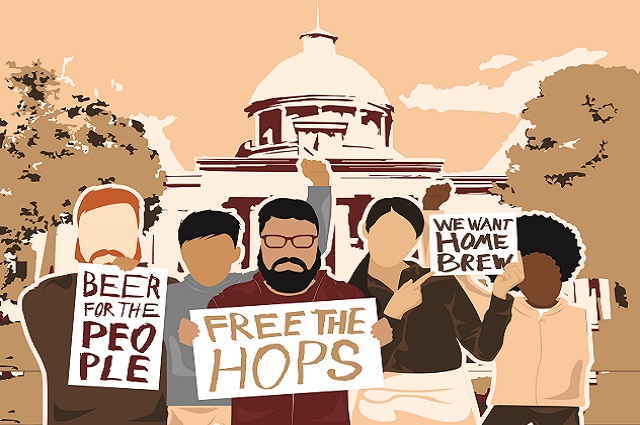 Beer may be the oldest recorded recipe in the world, but legal craft brewing was a long time coming to Alabama. It only became lawful in May 2009 with the passage of the Gourmet Beer Bill. So, as part of the state’s bicentennial being celebrated this year, the Alabama Brewers Guild introduced a series of five beers known as the Capital Series. Each annual release was formulated through collaboration of guild members and honors one of Alabama’s capitals, beginning with St. Stephens and running to Montgomery, which became the present seat of government in 1846. 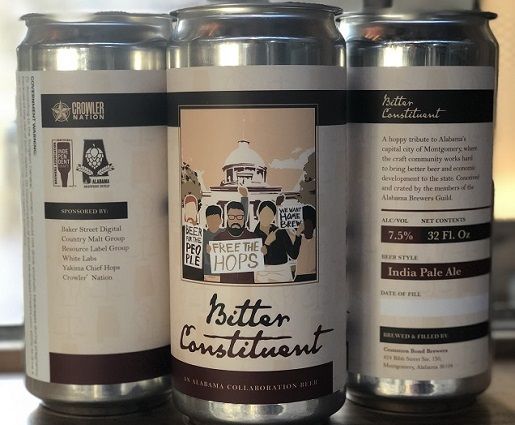 The latest and final release, called the Bitter Constituent, highlights the evolution of craft brewing in the state, starting with the lawful ability to make beers with alcohol by volume (ABV) greater than 6% and up to 13.9%. The 2009 bill was followed in 2011 by one that allowed tasting rooms, and two laws in 2013—one that permitted large-format bottles (wine-bottle size), and a second to legalize home brewing as a hobby.

Bitter Constituent honors the state’s craft beer fans and volunteer grassroots efforts that made those legislative advances possible, including the leadership of Free the Hops and Right to Brew, a coalition of homebrewers and homebrew clubs across the state.

The American-style India Pale Ale (IPA), made with five different hop varietals, was tapped at Common Bond Brewers in Montgomery. Additional craft beer outlets also are selling the beer, although quantities are limited on this small-batch release.

As Alabama Brewers Guild executive director Dan Roberts told al.com, “We have the best fans in the world. Not only are they loyal customers and evangelists for craft beer, they are also dedicated advocates. We owe them everything.”

Since the guild started tapping its Capital Series, with collaboration from the Alabama Bicentennial Commission and local historical and preservation organizations, those fans and advocates have savored each release, beginning with St. Stephens Stout. 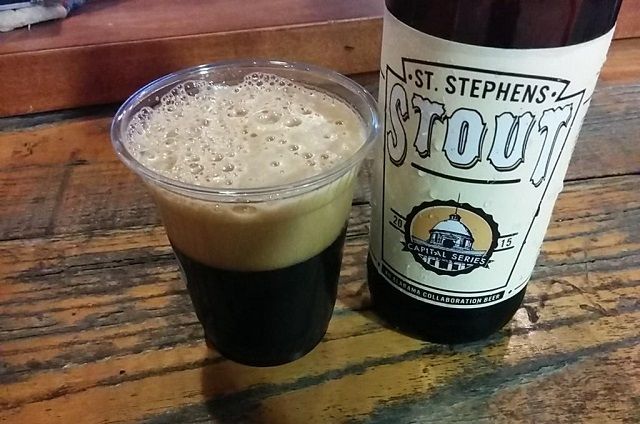 Released in 2015, the American Stout recognized St. Stephens, which served as the capital of the Alabama Territory for two years, from 1817–1819. Today, the former pioneer town is a historical park and archaeological site.

This first-in-the-series beer, a collaboration of 26 breweries, was brewed with Alabama-grown wheat malt and fermented with Alabama-propagated yeast. “It’s pretty smooth,” Tripp Collins of Back Forty Beer Company told al.com. “It’s got a lot of chocolate, roasted caramel notes in there. When you think of a big wintertime stout, that’s what it is.”

Good People Brewing Co. bottled the small batch, and it was sold at stores statewide in large-format, 22-ounce bottles. 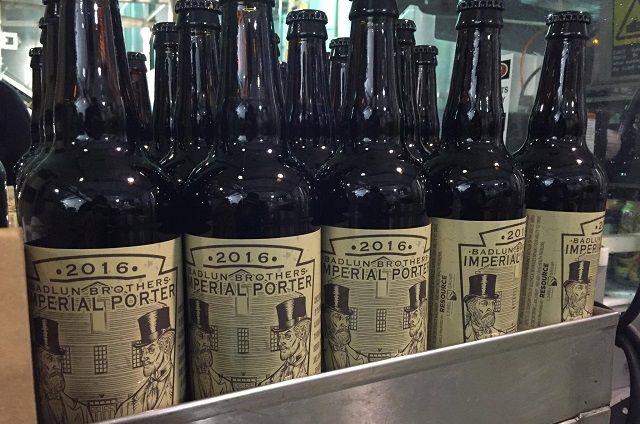 Badlun Brothers Imperial Porter followed in 2016, and was crafted to highlight Huntsville, site of the constitutional convention in 1819 and Alabama’s first brewery. The beer gets its name from brothers James and William Badlun, who established the brewery that same year on their 10 acres located west of downtown Huntsville, just before Alabama was admitted to the United States as the 22nd state. The brothers advertised “Porter, Ale, and Beer, of a quality inferior to none, by the barrel or smaller quantity.” According to research by the Alabama Brewers Guild, the Badlun Brothers brewery was British style, and its porter would have been a dark beer with an average 4.3% ABV.

For their collaboration beer, the guild members decided to target their porter more toward the tastes of today’s beer consumers. They developed a recipe using traditional English ingredients, but one with a 9% ABV, a robust character, and heavy with molasses, dark malt and English hops. The one-time release was distributed to stores, restaurants and bars serviced by International Wines and Craft Beer. 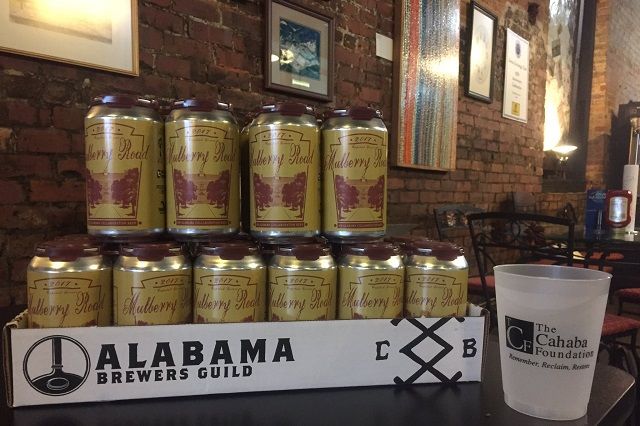 Next, the brewery collaborators turned their attention to Cahawba, site of the first permanent capital of Alabama from 1820–1826. Inspired by the mulberry trees that lined the streets of Old Cahawba, the guild members brewed a Belgian-style Dubbel, naming it Mulberry Road.

In a statement announcing the third beer in the series, the guild noted how “The natural sweetness of the mulberry is a perfect match for the rich and malty complexity of the Belgian-style Dubbel and keeps the focus on the fruit.”

Indeed, the fruit is one to enjoy. Similar to a blackberry, the mulberry is dark-colored, sweet, and delicious in pies, jams, and wine. So why not beer?

Cahaba Brewing produced Mulberry Road at its facility with help from other brewers across the state. Additionally, several member breweries crafted their own mulberry-based beer styles for their tap rooms. Occasionally, one of those breweries may offer the beer as a special tap. 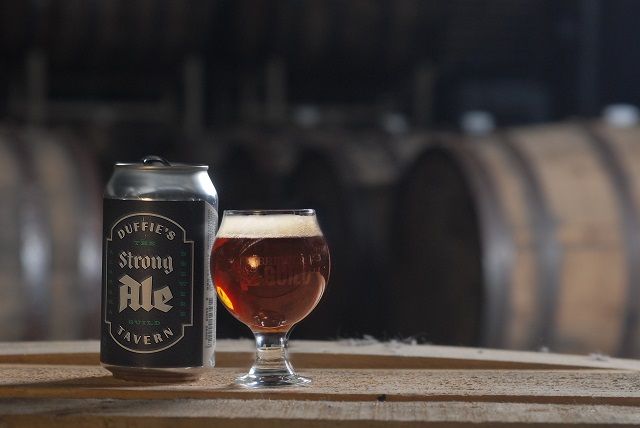 Tuscaloosa served as the state capital from 1826–1846. Now a city tied more to football and the University of Alabama than legislature, the home of the Crimson Tide also hosted the Old Tavern. According to the Tuscaloosa County Preservation Society, this historic stagecoach inn doubled as political headquarters during Tuscaloosa’s 20 years as a state capital.

It was known as Duffie’s Tavern and is now a museum located near Capitol Park. As a result of its importance to the political community, the brewers guild chose to pay homage to the gathering place with its fourth Capital Series, released in 2018.

Collaborating breweries crafted Duffie’s Tavern Strong Ale as a salute to the old English ales of the mid-19th century. The deep red-orange beer is bold and warm with hints of toffee and dried fruits. It was widely distributed that year throughout the state to specialty market outlets.

Like Alabama’s bicentennial celebration, the Capital Series has been fleeting. But beer connoisseurs in the state may still get lucky and find bottles, cans or even the occasional bicentennial-related tap in rotation before the 2019 celebration officially concludes. For more information on where to begin such a bicentennial beer hunt, visit alabamabrewers.org.