Get In The Game 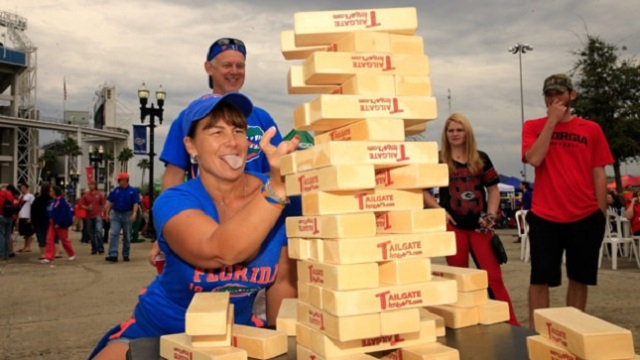 You can't have a party without games! Here are some great ideas to amp up the tailgating fun!

DESPITE ALL THE JOY THEY MAY BRING, eating and drinking alone does not a tailgate make. Sure, there’s also the prediction talk of the current season, the razzing of the stray visiting team fan, and the general catching up with guests and reminiscing of past parking lot parties. But even with all that, a tailgate simply falls flat without a few fun games to play when kicking off the cheering and sportsmanship spirit.

When going for Game Day Guru status (and really, why would you want anything less?), it’s time to pull out all the stops, choosing activities just right for the location, the guests, and most of all, a good time. A more conservative tailgater might stick with beloved games of bean bag toss (aka cornhole), ladder golf, or for the drinking set, flippy cup. While all great choices, these standard go-to games are not your only options. When you’re feeling the need to switch up your game, score big with the following great ideas.

PERFECT FOR THE PAVEMENT

TUMBLE TOWER: The standard stacking and balancing game of Jenga® has grown to giant proportions. Starting in at 3 feet and growing higher through playtime, the building block game that was once put on top of a table is now perfect for the parking lot. Oversized sets of the official Jenga® game are available for sale, or you can make your own DIY version using hardwood blocks measuring 8.25 inches by 2.75 inches by 1.75 inches.

RING TOSS: Giant stuffed teddy bears prizes removed, this classic carnival toss game is great with guests. For a more PG-version of the game, assemble a four post PVC apparatus. Start by connecting four equal-length pipe pieces using a cross joint, to form an X-shaped base. To each open end, connect an elbow joint and another pipe piece, making a right angle. Close off each open end with an end cap. Use plastic rings to toss, or cut and attach the ends of pool noodles for something more lightweight.

For the drinking game version of ring toss, set up two teams, giving each a crate filled with beer bottles and lightweight rings made from thick rope. Each time a ring is tossed onto the opposing team’s bottle, one player from the team must remove the bottle to drink. The team with the most full bottles at the end of the game wins.

JUG BALL: Tired of tossing a baseball, football, or Frisbee back and forth? Change up your catch with a game of jug ball. Prior to the tailgate, cut off the bottom 2 inches of two or more cleaned out plastic milk gallons (be sure to keep the handle intact). Cover the rough cut edge with duct tape. Toss and catch a small ball between you and your guests.  To beat late fall heat, switch to water balloons (so long as you don’t mind getting a little damp). And if Jack Frost shows up for an early game, sling around some snowballs.

GREAT IN THE GRASS

VIKING CHESS:  Also called “Koob” (or “Kubb,” depending who you ask), this versatile game is knockdown fun. The game is set up using four post corners to define the playing area. On two opposite sides, each team sets up five “koobs,” which are essentially short stumpy pieces of wood stood on end, between their two posts. In the middle of the playing area is a taller king koob post. A team must knock down all the opposing team’s koobs by tossing short dowel rods. Once all koobs are down, they must take down the king to win the game. However, any team to knock over the king before all the opposing teams koobs are down, loses.

SHISHKABALL:  Want to relive the old-school game Ker-Plunk, but super-sized? Shishkaball turns wire fencing, plastic balls and plant stakes into an oversized version of the famous ball-drop game. Wrap around the fencing to form an open tube, using metal stakes to hold it in the ground, if needed. Skewer plant stakes through the center, so that they form a shelf within the tube. Pour in the plastic balls so that they balance on the stakes. Each player has to remove a stake, with the goal of minimizing the number of balls to drop. The person with the least amount of balls at the end of the game wins.

VOLLEYBEER: Turn the classic game of beer pong into something bigger and better. In a pyramid shape (three in the back, two in the middle and one in the front), set up six large bins, such as clean round coolers or trash cans. About 10 feet away, set up a second pyramid, so that the two single bins face the center of the playing area. Standing behind the pyramid and without jumping, one team tries to throw the ball into the other team’s bins on the other side. If the ball goes in, the team owning that bin has to drink. That bin is removed from play, with the object being to remove all the bins away from the other team.

Even with all of these stellar options, do you still feel as though something’s missing without the bean bag toss? Don’t fret! You can still have your cornhole and play it too by simply taking a twist on the traditional. Instead of bringing out the bulky platforms, shrink it down to tabletop size. Make mini cornhole boards to put on opposite ends of a table. Give each team ping pong balls instead of bean bags to toss. While it’s good clean fun for kids, add alcohol and you’ve got another fun drinking game. A true win-win!