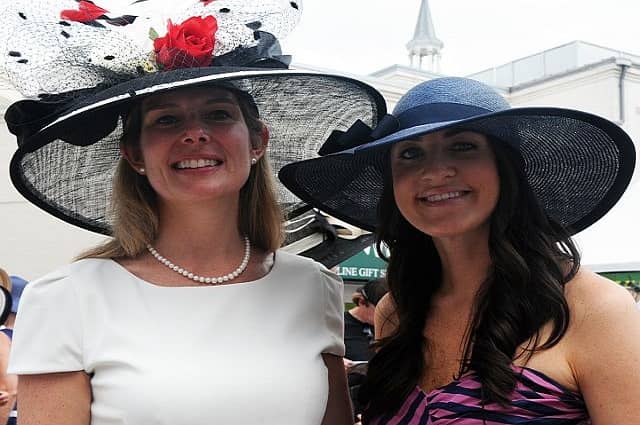 Later this month, two of the most important cultural events in the life of tailgaters will occur just one week apart. I’m talking, of course, about the spring race at Talladega Superspeedway—the GEICO 500 (April 25)—and the Kentucky Derby (May 1).

On the surface, the Wild West atmosphere of one of NASCAR’s most iconic races has nothing in common with the hoity-toity, rarefied air of horse racing’s gentry. While one might not find the exact same fans attending both events, when you think about it, there are quite a few similarities between these two events. I know what you’re thinking, “Mr. McIntosh, surely you can’t be serious?” In the eternal words of Dr. Rumack (played by Leslie Nielsen) on that doomed flight to Chicago, “I am serious—and don’t call me Shirley.”

There’s no doubt the Kentucky Derby is known for its fashionably dressed fans, but what one wears is equally as important in Talladega. When choosing an ensemble for either the Kentucky Derby or the GEICO 500 (or any NASCAR race, for that matter) color is vital.

For the fashion-conscious Kentucky Derby, the colors are all about pastels. The closer one resembles an Easter egg the better, whether it’s lavender, pink and baby blue in a bowtie on the hipster dude or floral-print cocktail dresses on the ladies. For those interested in standing out in style and in need of a little guidance, the Kentucky Derby’s official website (kentuckyderby.com) provides pertinent advice. “You can…let the color and excitement of spring inspire you,” reads the site, “and select a dress full of color, or floral or equine patterns.”

Similarly, color is an important indicator of one’s level of fandom at a NASCAR race. In places like Talladega, however, vivid primary colors are of major importance. The right red, yellow or blue on a t-shirt or hat signifies the driver tribe with which you identify. Also—and this is important, so pay attention—those colors change over time due to a driver’s corporate sponsorship.

For instance, one would wear a blue shirt if one were a Kyle Larson fan, red and black for Kevin Harvick, yellow for Kyle Busch, so on and so forth. However, one would not wear a light blue shirt with a number other than “3” on it and claim to be a faithful devotee of the late, great Dale Earnhardt, Sr. Such a faux pas would be akin to wearing white shoes after Labor Day. It is simply not done.

Hats are, of course, a signature accessory at the Kentucky Derby, especially for the ladies. Again, we turn to the Kentucky Derby website for erudition: “Part Southern tradition, part spectacle, the Kentucky Derby hat parade is much of what makes ‘The Greatest Two Minutes in Sports’ one of the greatest people-watching events in the world! From the fantastic to the sublime, there are no rules or limits when it comes to choosing your Derby hat.” Recently, the men have gotten into the act, sporting a variety of fedoras, derbies, and pork pie hats at Churchill Downs.

Hats are an important, albeit, practical fashion accessory at Talladega, if one intends to spend eight hours in the scorching Alabama sun. Baseball caps, visors, and cowboy hats are commonplace in ‘Dega. However, if one were to wear a pork pie hat or a fedora, one would be taking one’s life into one’s hands.

That doesn’t mean the forward-thinking NASCAR fan can’t find creative ways to express him—or her—self. In a pinch, a bandana, old t-shirt, or an empty beer-case box can serve as shade from the heat while making an impressive fashion statement.

Just keep one thing in mind: if you accessorize with beer cans, one must be certain to use the same brand of can that came in the box. One should never wear a Bud Light box hat while sporting a Miller Light necklace. You wouldn’t want to look foolish, now, would you? 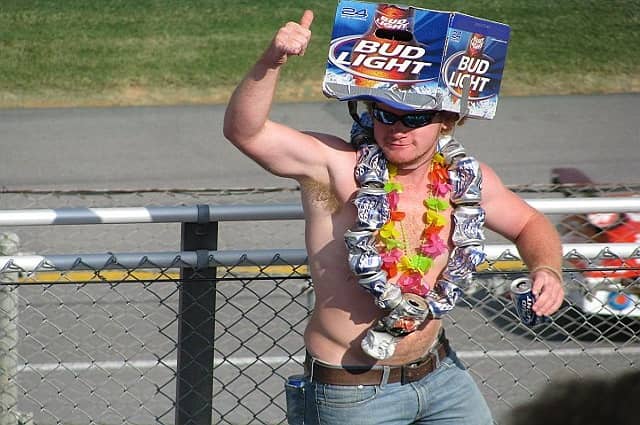 Loyd McIntosh grew up in Birmingham, Alabama, in a family full of NASCAR fans and now lives 20 minutes from Talladega Superspeedway. He would probably not be allowed to enter Churchill Downs.