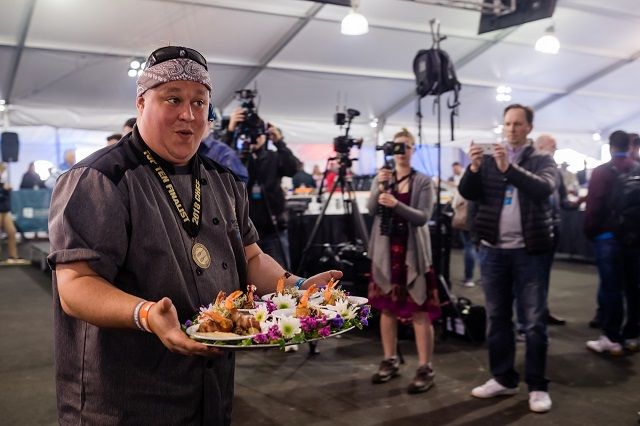 Make plans now to witness this high-paced, multiday competition made to be watched—and tasted.

This year’s World Food Championships (WFC) is on track to be the largest food fight to date, with over 1,500 cooks traveling from around the globe to battle it out over five days for a shot at a $350,000 prize purse. As the highest-stakes food competition in the world, this live culinary clash of talent showcases some of the world’s best cooking masters as they compete for food, fame and fortune in ten categories—Bacon, Barbecue, Burger, Chef, Chili, Dessert, Recipe, Sandwich, Seafood and Steak.

Dubbed the World Champion in their category, the winners spanned the U.S. and beyond, including Beau Smith from LaMarque, Texas, with his Oscar la Vista Baby seafood dish and Oliver Sievers from Bochum, North Rhine-Westphalia, Germany, with Lamb T-bone in the Barbecue class.

This year, the contenders will convene in Dallas, Texas, starting October 16. Each will have earned their spot by having toppled rivals at various qualifying events held throughout the nation and around the world. At WFC, though, they will not only compete for a chance at winning the ultimate food crown and a cash prize, but the potential to springboard to TV fame through many well-known food shows.

Since its debut in 2012, WFC has helped launch 30 TV food stars, awarded more than $1.8 million in prize money, garnered more than 6.9 billion media impressions, and connected over 150 food brands with food fans, food bloggers, and food media. In short, it has given birth to the concept of Food Sport by providing a level playing field with a fair judging system while allowing the culinary elite to show their chops and earn the respect they deserve.

Better still, the WFC is a foodie’s dream come true. In addition to all the action in the Kitchen Arena, this creative culinary fest offers special savory experiences, such as tastings in the Walmart Tasting Pavilion, free food demos on the Main Stage featuring Maximus (as seen on Gordon Ramsay’s “To Hell and Back”), and World Food Games––all for only a $10 general admission ticket.

While the $10 ticket price is easy to swallow, there are ways that foodies can access the Ultimate Food Fight for free—