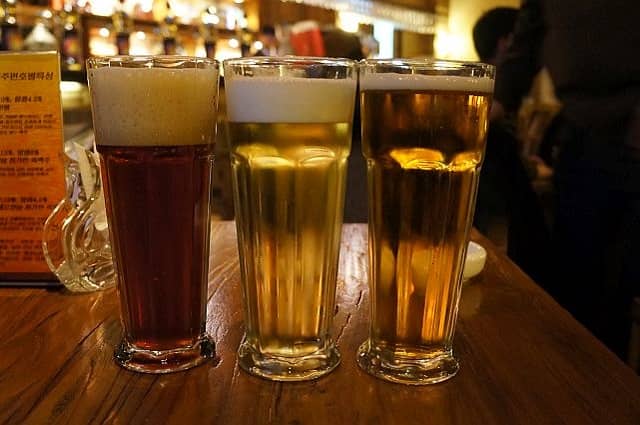 When daffodils’ green stems poke from the soil and birds tweet at sunrise, it’s clear that spring is in the air. Folks tidy up and prepare their outdoor living spaces. College basketball concludes while Major League Baseball warms up. And breweries switch some of their taps to beers brewed with flowers, fruit and lighter notes in mind. Check out these styles perfect for the season.

As suggested by the name, this German-originated beer pairs well with anything happening in May. It is part of the Bock family, but paler in color and a bit hoppier than its traditional cousin. Lightly toasted malt flavors come through, but without caramel. Expect 6%-8% alcohol, and pair it with ham. The two go well together. As noted on americancraftbeer.com, Maibock is “the most unique and purely spring beer that’ll help you bridge the gap between winter and summer.” Try Capital Brewery’s Maibock or Haw River Farmhouse Ales’ Maibock Springtime Lagerbier.

The defining characteristic of these unusual beers is acidity, and craft beer lovers DRINK. IT. UP. The taste is sour, like purse your lips or shake your head sour. As for the rest of this beer style’s profile, well, it runs the gamut. Colors run from pale to dark. Bitterness ranges from low to high. So does alcohol content. You find fruit influences in this style, such as the raspberries and blueberries present in Crooked Stave’s Sour Rosé or Michigan cherries in Karl Strauss Brewing Co.’s Queen of Tarts.

Sour beers, noted above, get a boost come spring, and Gose (pronounced Goes-uh) presents opportunities for beer drinkers to try the sour-to-tart style with varied aromas. The cloudy, straw-to-light, amber-colored beer contains no hops, so brewers’ experimentations with herbs, spices, fruits and flowers dominate the profile. Drinkers find Gose sharp and refreshing, and occasionally note a hint of table salt, which is part of the style’s traditional character. Enjoy the floral notes of hibiscus in Boulevard Brewing Co.’s Hibiscus Gose or a touch of lemon in Anderson Valley Brewing Co.’s Holy Gose.

India Pale Ales are so popular that people drink them year-round, but spring brings in a crop of new IPAs. Think bright flavors, citrus and general hoppy deliciousness. You’ll find American IPAs and New England IPAs, with the occasional English-Style IPA thrown in. American IPAs are by far the most popular craft beer style. They’re appreciated for their bitterness and floral, piney, or citrusy hops. New England IPAs share those qualities except the hop aroma and flavor are enhanced and bitterness is diminished. This year try Spring IPA from Peak Organic Brewing Co., Spring IPA from Maine Beer Co., or Juicy Bear IPA from Hopworks Urban Brewery.

Belgians come in many forms, but the Blonde Ale is a good one to try when snows are melting, and tulips are popping. It is light- to medium-bodied with enough hops bitterness to help ease drinkers’ transition from winter’s heavier, heartier beers to spring’s lighter ones. Belgian Blonde Ales feature no haze and are easy drinking, even with their medium ABV percentage. They carry some sugar and spice, and finish, oh, so nice. Ones to seek: Devotion Blonde Ale by The Lost Abbey and Tiburon Blonde by Marin Brewing Co.