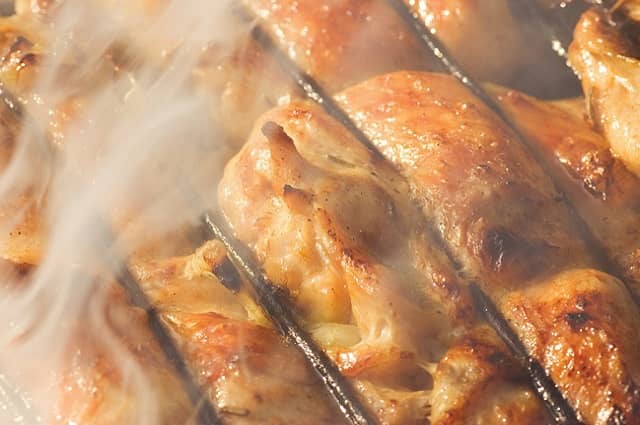 A lot of people prefer using charcoal or wood for barbecuing because they like the smoke flavor in their meat. For tailgating there are two major advantages to using propane instead of charcoal: Gas grills are ready to use very quickly. No waiting for the coals to be ready and when you’re finished cooking, turn the grill off and you’re done. There are no hot embers to dispose of and the cooling off period is extremely short.

You can have all of the flavor of wood with the convenience of gas. Getting wood flavor from a gas grill is easy and makes your food even more tasty. All you need is some nice woodchips, aluminum foil, and water.

1. Soak the wood chips in water for at least 30 minutes. Put the chips in a resealable bowl or zip lock bag with enough water to cover them if you are traveling to the tailgate. Use about 1 cup of chips per hour of cooking.

2. You can add some whisky to the water for additional flavor if desired.

3. Pre-heat the grill to high.

4. Place about a half a cup (or a handful) of wood chips onto the center of a square of foil.

5. Bring the edges up to meet in the middle and then fold down together until they touch the wood chips.

6. Fold up the other two ends of the foil packet.

7. Poke some holes in the packet using a fork or knife and being careful not to go all the way through the bottom piece of foil.

8. Put the foil pack right on the burner of the grill and wait about 5minutes for smoke to start.

9. Turn down the heat and smoke your food.

10. Add more foil packets to achieve the desired amount of smoke flavor. Use about one packet every half hour.

This technique can be used with anything from cedar and mesquite to more exotic woods found at barbecue shops like orange wood, pecan, and cabernet barrel chips. For indirect cooking, be sure to place the wood chip pack on the burner that is on, so the smoke passes over the meat rather than directly under the meat. The best part is there’s nothing to clean up afterward. Just throw away the foil and you are ready for the next cookout.

Place the tri-tip in a large sealable plastic bag. Rough up the rosemary by rolling over it with a rolling pin or smashing it with a pan to release the flavor. In a non-reactive bowl (ceramic or glass) combine 1 can of stout, mustard, mustard powder, horseradish, pepper and rosemary. Mix and pour into the plastic bag over the pork. Add the onions and seal the bag – removing as much air as possible. Don’t let the rosemary poke through the bag. Massage the marinade into the meat and ensure that it is well coated. Leave the meat in the fridge or cooler for 4 hours. This is a good time to drink the second beer.

Remove the tri-tip from the bag and pat dry. Strain the marinade into a saucepan and reserve the onion. Reduce the marinade in a pot on low heat for approximately 20 minutes until the sauce coats the back of a spoon. Wrap the onions in aluminum foil and throw onto the grill during the last 20 minutes of cooking, making sure to flip the packet occasionally.

Heat the grill to medium high (350 degrees). Rub the roast with olive oil and season with salt. Place the meat on the rotisserie and roast at 250 degree F and baste with the thickened marinade every 20 minutes. Cook until internal temperature reaches 145 degrees, (about 2 hours.) Use two foil packs of soaked wood chips as described above to impart a wonderful smoky flavor to the meat. Hickory is a good choice and if you want something really bold, cabernet chips will work wonders as long as you don’t go overboard.

Let the meat rest for at least 10 minutes before serving, always cut against the grain with tri-tip and serve with some extra horseradish. Plan on about 1/3 to ½ pound per person.